Did the Freedom Trail. Well, intended to do the FT, but couldn’t really *do* the trail as I was too cheap to pay the fee, and the humiliation of following an 18th century costumed person around downtown Boston was just too much. So instead, I read up on the internet and walked the route. I read a lot of plaques too. It’s a little more special-feeling to come across plaques randomly as you’re doing some other errand and read them yourself anyways. A woman at the wedding who has lived in Cambridge all her life admitted she had never been on the Freedom Trail! Sigh.

Favorite cafe!!!! Found a great one while wandering around Beacon Hill the first day. It’s got great breakfasts during the weekends, Panificio. I whiled away the early hours Saturday and had a great scone and au lait, then returned the next day for eggs benedict, and a great cinnamon scone later that morning.

Funny thing walking around Charles Street in Beacon Hill. You don’t notice the seven elevens and Starbucks. The building code there is very harsh, I think. 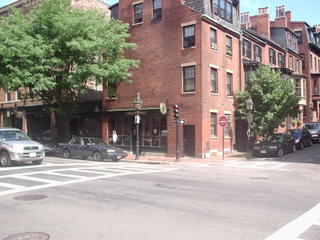 It is a walking town, but there are a couple of weird observations I had (that I checked out with other Californians walking with me):

– the sidewalks (at least in Beacon Hill) are really, really uneven. Because of this, people walk in the street. What’s the purpose of the sidewalks, again?

– I never figured out the streetlights. Everyone walks against them, and they never change lights. At 5am with a cabbie, he kept on running lights because we would sit there *forever* waiting for it to change.

– the East Coast phenomenon of paying for things that in the West are free- like roads, and national park museums. Well Ok the Smithsonian is free, but I wante dto go in the Meeting House, the first conservation project (according to the plaque), and it costs money. So weird!

– smoking. A lot of people smoke. That’s my observation.

– The house prices are very expensive. 600K for a 2-bed Beacon Hill apartment. SF is steeper by tenfold, but still.

Cambridge
I didn’t spend a lot of time here, because I had in the past. I did take the T, which had that urban grimey feel like East Coast transit (minus Marta in Atlanta). Conversation overheard on the T between two college students with full backpack regalia:
girl: “so what is your favorite camping item.”
guy: “headlamp.”
Go Harvard! Oh, they start next week, so maybe they were another college getting off at Harvard Square (?). 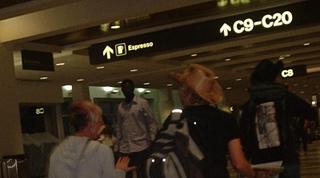 Yes, it says in the upper left side of that photo, in white writing, “ESPRESSO” near information like restrooms and gates.

I went to the Massage Bar there every Friday for 2-3 years running, so I had to stop by and see my old friends. They were super happy because the brewpub had moved from next door to them and they no longer had to endure an annoying waitress’ laugh. The guy gave me a 50% off discount, very sweet.

Random Flying Notes
Friday, SF->Seattle. Kiwi sitting next to me has extensive blog that I’ll find somewhere and link to from here. He opened up the world of business travel wireless to me (it hadn’t kicked in when I did my heavy flying bit). Also funny story about his relatives in Sweden, and how they missed their main emigration ship because “someone had left an ivory needle at home”. They took the next one a few weeks later. Turns out that the ship they missed sank!

Friday, Seattle->Boston. On the way to Boston, the guy next to me had gone to Afghanistan for relief work a few years ago. Very neat.

Monday, Boston-Seattle : When we landed in Seattle on the way home, a small dog got out of the baggage area and was running around on the tarmac. We all had to sit down and the dog owners (there were 3 sets of dog owners) had to figure out which dog it was. Small yellow lab, and the little yuppie couple scampered off the plane after their dog. People were very pissed.

Monday: Seattle->SF Flight. The guy next to me on the flight home thought I was a student. Score!

Monday, SF: Long Term Parking Lot Shuttle: Woman next to me on the shuttle to Long Term in SFO has a daughter in UCB, and she has gone to Cambodia, Thailand, Bali, you name it.