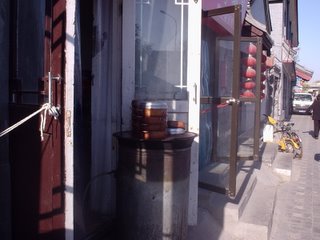 Thoughts on Trip
Above is a shot of my favorite dumpling place, right near the last hotel we stayed in (bamboo garden). It was in the northern part, right near a subway stop, and a little block and a hutong crawl from the lakeside bar district.

I’m telling people that it was overhwelming, and that’s definitely true. I can’t cover it up- I went through an intense period of being homesick, being sick of speaking Chinese, and feeling thoroughly dirty. Interspersed with that were very rewarding times when people actually understood me! And when I ordered random food and it was what I expected, or I got to meet neat people and help them order things in Chinese.

There were a couple of very strange incidents:
– experiencing the random phone calls at night by hookers (Xi’an, never happened in the courtyard hotels)
– ending up playing poker w/ some prostitutes and pimps
– interrupting an unsuccessful three-person pickpocket scenario
– having a woman show up at my door with a business card, babbling in Chinese (well it soundd like babble to me, I had just woken up from a nap.)
– inability to order a cup of tea, always a pot, and neither Carroll or I knew the measure word for “pot”
– Carroll’s hand-made jacket arriving at 2am
– the two taxi cab scams that I unwittingly got us into, involving our luggage being trapped in the trunk, and another guy stopping on the freeway threatening us that he’ll let us off- to which we replied, great, see ya later.
– even though I *knew* about the ‘art student’ ‘english student’ scam, I fell for it to a degree, having a long engaging conversation with one of these guys, and finding out just how much bullshit he spews