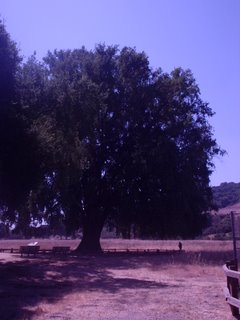 Big Bay Laurel Tree
San Antonio Park, county open space in Los Altos Hills. I have fond memories of this tree. Sister and I would come frequently and play tennis in the courts nearby. It is usually blindingly hot and dry during the summer, and she wasn’t old enough to drive, so we would walk the railroad tracks here, with our rackets, and then play tennis to exhaustion, drink some water, sit under the tree, then walk the tracks the two miles home. That’s something crazy kids do. Can you imagine waking up and saying, “Let’s walk to exhaustion in 100 degree weather to play tennis and then hike back in the sun?” Knowing our vanity it was probably all about getting our hair blond and getting a tan. When she got her license, I remember coming back here with BOYS and getting donuts on the way. Oh, the follies of youth.

The hardball courts across from the tennis courts were taken out.

California Quiz
So I recently inquired of someone from Long Island, what state is that in again? And I got a lot of ridicule, and I volleyed back with a series of California questions. Give yourself a point if you know these:

1. Where was the last Mission built?
2. What was the single reason so many Indians died when the missions were setup?
3. What did the Mission priests call the Indians?
4. What was the southern most point the Russians settled? What is the name of it?
5. Original name of San Francisco under Spanish rule?
6. What island in the bay is manmade? When was it made?
7. What was the capital of Alta California (Northern Mexico, containing Baja, lower California, parts of current Mexico) before it became U.S.?

0: You never read that state sponsored Mission history book we all had to read in 4th grade.
1-4: Not bad, you may even be “from” here in the U.S. sense.
5-7: Impressed! You’re a history geek and a Californian! You could possibly pre-date the U.S. occupation of California!