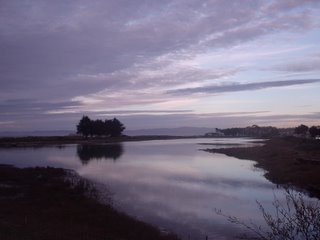 Spent an hour or so at Chrissy Field yesterday. I got there kind of late and was able to witness the alpenglow-like effect around 5pm, which is not something to miss. I was expecting tons of people walking up and down the paths, but since I kept mostly to the beach instead of the walkway I had a really nice low-crowd experience.

Some kids on bikes were hitting all of the puddles, and everybody was commenting on it, very cute. This one boy kept falling off his bike in slow motion, sideways. He would manage to aim into hills and fences, though. His mom told me later that it was his first day off training wheels. I was really impressed.

I feel so lucky that I’m close to this amazing public space. The Golden Gate Bridge is shining there like a big safe … gate… my powers of description are awful today. The Presidio shelters one side of the park so that you really feel like you’re away from cars and busses and exhaust and everything. I’m very fond of marshes too, and the estuary nearby gives it a calming effect. The birds were in full flight (haha).

Warming Hut is so great. I got a mocha and a scone. I mean, it’s amazing. Good food, great views, line moves fast, fun stuff to look at while in line.