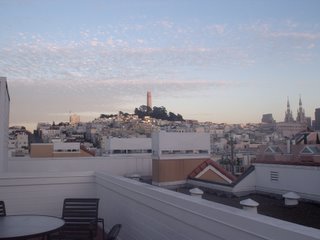 I’ve been super busy and believe it or not, unable to write my usual myopic opinings about local SF life. Well here are some tidbits that I just can’t hold back.

DPW
Walking home late from union square, ran into a DPW (department of public works) van and guy on Stockton street. I talked to him for a bit about who leaves stuff on the street, if they fine the landlord, or owner of the property, etc. I have a photo story of such items left by (ahem) myself, and a resulting DPW van picking them up. Turns out: you can as a citizen, fine another person for leaving stuff on the sidewalk. The inner mission was doing some self-policing on this front right before I left. He said that Chinatown is far tidier than the Mission in this regard, and I have “definitely moved to a nicer neighborhood.” Aw, respect from the DPW guy! He was quite chatty.

Discounts on Cable Car
I thought Newsom was full of it, but I too received a huge FREE RIDE on cable car yesterday around 4pm going from union square to my house. The operator said “two bills” as I boarded (an attempt to get a tip, I think), and I heard him say the same to other passengers. I never saw him take fares at all. As I got off, I tried to give him my hard-earned 5 dollars but he wouldn’t take it.

He also defended my pedestrian rights to a pickup truck racing down Mason Street. Trivia: cars are supposed to stop behind a cable car if the cable car is stopped, not speed past it. I didn’t know.

Lefty O’Doul’s
After a networking event at the super-hip Tunnel Top, a singer friend of mine descended into the haunts of tourist dive hell.
So the Gold Dust does not serve food, which sucks, but Lefty’s has a not-badly priced steak cafeteria setup and a piano bar, which is a piece of wood cut to be in a grand piano’s shape, with an electric keyboard jammed underneath. So it was divey, and full of wealthy tourists, and I just want to say to all the haters out there: tourists rock because they are friggin’ HAPPY. SF Townies tend to be kind of bummed about something, probably real life, whereas tourists are on vacation and far from their troubles. Tourists also bought us a lot of wine that night, now that I think of it.