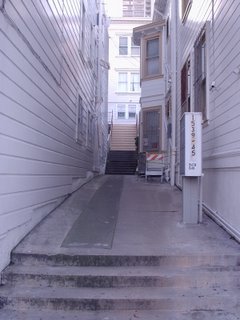 Near Pacific & Taylor, Name Escapes Me

Chameleon
The writer’s cafe. OK so I’ve figured out that it’s got great feng shui, mellow tunes, and big windows for people-watching, all the great ingredients for a perfect writing spot. And guess what? Others have too. Dagnabbit. I overheard two people behind me last night discussing their writing group that meets there every honkin day (to appreciate the happy hour, 4-6, 2$ bottle beers). Then, they talk with another guy next to them who is also a journalist, and a “regular” at this cafe. It put my own self-described regular patronage into question. I just come here on Wednesdays. Does that mean I’m not a regular, if this guy is here every day?

One reason I love Chameleon is that it’s on top of a hill, and you can see across the Marina and over to the Presidio from the window seats. A cafe with a view! A cafe that is a hike, as well.

Pacific & Leavenworth. If that seems unfamiliar to you, it’s a few blocks west of chinatown, or a few blocks east of Polk/Union street village shopping areas.

I am now going to stalk the “writers” that I met and find out if they’re famous.

For now I will do a Harriet Spy-like description:
– old guy, wanted to “buy everyone a beer,” organized it. He’s a writer- novelist. Seems well connected (was namedropping).
– another old guy. He’s a poet. Not sure if he’s published. Other old guy was introducing him around as “a poet,” which I found was nice, as it sucks when you have to say it yourself (almost all good traits should be said by friends, no?)
– an older Asian woman, who lived nearby. Old guy #1 was telling her the comings and goings of her flat, which she informed him, was her “son in law.” One shady guy on the street identified, a million more to go.
– “duncan,” writer for the washington post. He is the super-regular. Also working on a novel, that he’s been working on for a long time.