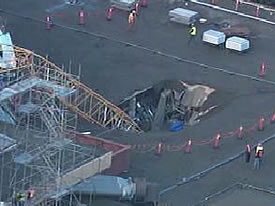 I waited out the 6:30-8:00 freakish windstorm last night. I was at work in Emeryville, and it felt like either some giant was stompong on our ceiling, or a few sound blasts were happening in the parking lot. These old warehouse buildings don’t do well with 60+mph winds, it was weird. I kept wanting to turn to co-workers if but to say, “wow.” (a word I was banned from saying by one co-worker because I say it too much.) “What does this mean, wow?” he says, in a heavy Indian accent, educated by the Brits. After enough hazing I did stop saying it, but those big gusts made me want to lapse back into wow-dom. The Bay Bridge was not so bad around 8:20 when I finally drove over, just a bit of tension on the steering wheel at the cantilever section, and everyone toned down their 70mph sprints to a crawl at 40mph.

My hometown mall! The Berkeley Naked Guy (before he went to UCB) used to flash down it’s sacrosanct hallways. Many an afternoon was spent looking for *just the right* pink Forenza sweater, or idly checking out the guys from behind the racks at … Benetton (forgot name, thanks Karen for remembering!). I guess Vallco is trying to renovate and match the glory of Santana Row in the Joser, which is really not a bad mall, and more oriented towards pedestrian traffic. There was just one summer night that was perfect, salsa music in the gazebo, lots of people around, and Nobody was Dancing, a crime against humanity, and something that would not occur in SF. Something for free? We would jump on it without a thought. Weird sidenote: Vallco Fashion Park does not have a web site. How weird! It’s the only place I’ve ever ice-skated, as well.