SF Bike Loop, the Tee Off 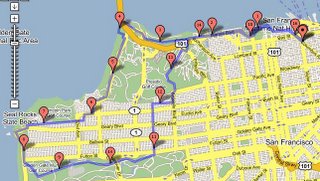 SF Bike Loop, The Tee Off
From 1:00 to 4:00 I was doing the above bike ride, on my crappy old bike. I will do the same route again with my new bike and compare! One problem, of many with crappy old bike, is that I only have three workable gears and they’re all at the highest resistance. So I did a lot of walking. I’ll be interested to know if I can make it up those hills with a bigger set of gears. My new bike is going to be: 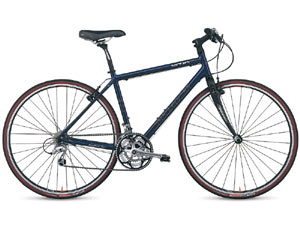 Maybe with some more bells and whistles. My biggest adjustment with the new bike will be how to use all those fancy new things like multiple gears, as well as toe-clips. The story with the bike I have now is that it was my sister’s bike messenger bike back in 1995. She messed around with it quite a bit and just today I noticed that she has Shimano brakes. They were very noisy the entire ride.

Anyways, beyond the always fascinating conversation of gear, can I say how completely gorgeous it was outside today! We had a full sunny day, big blue sky, a little bit of clouds later in the day. I didn’t bring my camera, so I hope I do justice with a written description. There were a few moments, like when I was just creeping out from under the Golden Gate Bridge on a footpath, and looking West towards the Farallon Islands, I noticed a tall ship not a quarter mile outside of the bridge, with just her jib up, and making a nice white wake. Later on down the West side of the coast, I rounded the corner near Cliff House on a descent and was blasted by a huge front of wind, as well as the full view of the Sunset, Golden Gate Park, and the Richmond, with the big expanses of Ocean Beach. From the vantage point it was truly awesome. There were not tha tmany beach strollers at all, and in the vastness of the beach they were just little bundled black dots wandering around kind of comically.

Going up Golden Gate Park was the usual beauty- eucalyptus groves, cypresses, and just being away from buildings and trucks and taxis for a while. There were some nice wildflowers along JFK Blvd. in Golden Gate Park . Didn’t see the bison.

My favorite Presidio gate is definitely Arguello because you get a nice twisting descent with Alcatraz and the Bay peaking through the trees. So much fun to go fast on a long twisty road, with the smell of eucalyptus, a bit of salt, and for some reason lots of grass baking in the sun.

I had a really, really good lunch of toasted bread tuna salad sandwich, with a soy mocha, at this cafe across from Lincoln Park golf course. New owners (to me, may be a few years), that are very friendly, and there’s a garden court to sit in. Just extremely good cafe food, and not even if you just biked 10 miles. The intersection is Clement and 30th, across from the Albertsons. There’s a defunct bar called the “Tee Off” (picture depicting a woman with arms crossed, glaring out at you… teed off? pissed off?) that is now a bait and tackle shop. They decided not to take down the sign? No idea.