Museum of North Beach, Jumping the Shark, or, Ritual Roasters 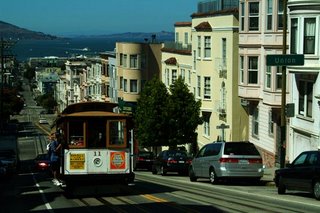 doesn’t this just scream Rice-a-Roni?
Museum of North Beach
It’s inside a bank and up a staircase, on Stockton at Columbus (the Chinatown side). I had always wanted to go in.. I’ve seen it a lot since it’s near East Wind Books and another new Beijing-style bookstore. The museum is cute. It’s got the vestements for a much loved priest from St. Peter and Paul church (Salesian) as well as a lot of history on the Covent that was on Telegraph Hill. They tout their sons of North Beach quite a bit, but no mention of DiMaggio, which I found… odd. Is there a scandal there? There’s a great hand-written version of Ferlinghetti‘s poem, “All the Old Italians are Dying”. I’m going to quote the last bit that I really liked:

I can just see that in Washington Square Park, though the bocce ball courts are getting renovated so I’m being figurative when I say “see” it.

Some tourists at the museum were wondering, aloud where “Full House” was shot, and I helped them out (Alamo Square) but it was more like I discouraged, than helped, them. It’s a long haul to Alamo Square from here with very few destinations nearby, but Upper Haight. I think they were just wandering around trying to figure out where else to go. Luckily a meal was approaching so that would solve the problem. One of them was from the East Bay and was giving a lot of bad advice. Those East Bayers! A little knowledge is a dangerous thing.

Good art moment today: one of my favorite Bay Area Figurative artists, David Parks, has some art in a gallery on Geary. Definitely checking that s**t out.

Jumping the Shark, or, Ritual Roasters
They should change their name to Jumping the Shark, because that has effectively happened. I’m walking around Valencia street, ever on my quest for the perfect cafe to write in, and I stupidly stopped into Ritual Roasters. It was packed. I had been warned by several friends of theirs that it had gone crazy, and sure enough it had. So I’m walking down the block, wondering what surrounding businesses think of the explosion of laptop-toting hipsters. Well, there’s a cafe a block down the street with a bitchin’ humus platter, big seats and no scene. Mission Creek. And as I sit here thinking it’s an overflow for RR, a woman sitting behind me is saying that to whoever she’s talking to on the other end. “It’s a block away. Yeah, quiet. Good food.” haha