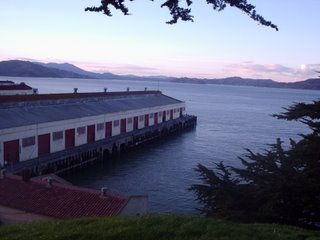 North Beach Newsletter
There was a pile of North Beach Newsletters in my apartment building’s lobby this morning. I used to love to read the Cupertino Courier for its Sheriff’s blotter. One day, a very special day, there was an item in there that would go down forever in my mind in indelible ink: “toss pillow stolen from community center.” I made the mistake of reading the Mission’s paper, Western Edition (perhaps the only local rag on that side?) and the number of grand theft autos that occured on my block in the past week made me realize the random car alarms going off were… not mistakes, let’s just say.
Much more exciting things are happening in San Francisco’s party district, North Beach.

They’re not going to use oyster shells for the bocce ball courts at Joe Dimaggio’s playground, but they are getting an expert from the Italian-American Club to oversee the new granite. Crisis! (oyster shells will blow into the kid’s play structure nearby.)

The North Waterfront is on the register of historic places (well, will be in 60 days) and the city has done nothing to commemmorate this, and the board who gives out this distinction told us at least we should “write a book.”

Because of a bad landlord on Columbus & Green streets, a bunch of businesses have moved out, notably the Gold Spike (86 years) and some cafe called JB.

There’s a big int’l beer festival at Fort Mason May 20th, benefitting the NB Playground- this is a really great playground, as playgrounds go.

The Live Worms gallery is having a Beat exhibit. (could not find a site for them, on Grant near Green)

Shipwrecks
On the very cool web site that shows all the historic places (city, state, fed) and it’s nice and searchable and sortable, there are three listings with…. restricted addresses:

Little tidbit on the Shipwreck of the Reporter:

On the evening of March 13 “Reporter” neared the Golden Gate in a thick fog. In the dark, Capt. Adolph Hansen saw a strong light to starboard, which he took to be the lighthouse at Point Bonita. Allowing the vessel to drive ahead and pass the light to enter the Gate, Hansen found himself caught in the surf; “not until the schooner was in the breakers did he know he was trying to hurdle her over the peninsula instead of going in orderly through the harbor entrance.” Hansen mistook a light at the Cliff House for Point Bonita Light, and “Reporter” struck Ocean Beach about three miles south of Point Lobos, beaching where the bark “King Philip” had gone ashore in 1878.

I hate it when that happens. It’s foggy, you see a light, you head towards it, instead you’re trying to sail across the Peninsula. That sucks!