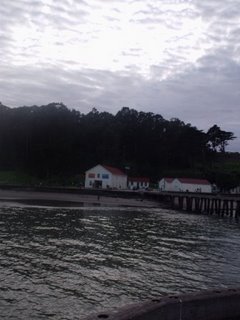 I wish I was here! the warming hut, at the base of gg bridge

biking buddies
There is a strange phenomenon: people talk to you on a bike. I made a German friend on my really short 12 minute bike ride to the gym yesterday. I was angry at this one “baby on board” SUV that almost swiped me on Bay Street, and along Embarcadero comes a friendly sort and we chat about clipless peddles, how to find Mt. Tam via bike, and the crazy crowdedness that is SF on a Sunday. I just can’t get over how social biking is. A few days prior a guy in a beret, tweed coat, on an old cruiser with paniers, zipped by me, said (I kid you not) “top of the day to ya!” and was about 20 yards in front the entire time. He was masterful, taking a cell phone call and cruising through red lights.

Movie Prep
By popular demand, I’m mixing the two blogs… with the idea that “walking to work” encompasses the movie, as it’s going to be my lifeblood.

I have a huge to-do list in my head of things to get cracking on.
– ask Al if he wants to be DOP (dir. of photography) may have to barter babysitting
– take stills of location ideas
– cast the leads
– work on the script more
– re-do the storyboard
– figure out how to get the lights, call the place, get an estimate
– get some cameras (have 1 already sorted, need to figure out another)
– see if storyboard requires a track, or if I can do hand-held
– setup auditions
– get some rehearsal space
– figure out costumes
– get an assistant director/producer!!!

I had this random idea that I could draft my neice, 8 years old, into being a gopher/grip. Is that child labor? She may dig it, she’s into theater. Also trying to convince my mom who has a nice big car, to be my assist. producer- mainly store the lights in her car. Neice could be a good script-person too, she’s into reading.

I keep on having these bits of thoughts that say “run, run, while you can!” because this is such an ambitious thing to do. But part of me is like, if it’s on my headstone, that’s cool “she tried to make a(nother) internet movie” vs. “she was a spammer for 20 million years.” RIP

Things I’ve learned from the last internet movie:
– hire actors, not friends. No diss on friends, but even when I watch other movies and I know the director cast his/her friends, you can tell. acting is a craft, so you can hire actor-friends, but not friend-friends
– get a good DOP. It’s another skill that is hard to fake. I think what made LL so professional looking is the lighting, camerawork.
– storyboard early, and take into consideration your limits of budget when you write the screenplay/storyboard, it makes your life easier
– get a good assist. producer. Having a very together, organized friend do this makes all the difference.
– alot about 2 weeks + to editing.