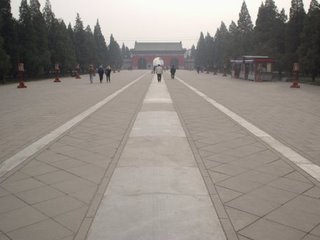 Here’s a little temple of heaven on a wet and wicked Tuesday.

Racism
Couldn’t sleep last night, and in the throes of daydreaming and anxiety thoughts, had an overwhelming concern that people would think my movie is racist. It’s good to question these things, it’s true, and I think when you talk about stuff, you get very close to the “line” whatever that may be. Setting a movie in occupied San Francisco, when the nation is a nation that I’m a fan of– and in all reality can’t imagine them invading (though they have) other nations– it’s all very complex. When you’re writing sci-fi, you use allegories to make points, yet this isn’t really sci-fi because I am within the realms of natural scientific law in almost everything, it’s just bumped up in the future a tad. So a tad sci-fi? Hmm. And yes, the occupation is similar to the Nazis and Paris, but the occupation isn’t about religion or racial identity. I have had some amazing plot insights that will really layer the screenplay, so my night of insomnia was very useful.

Feminism
A friend of a friend recently introduced an opinion with, “I’m not a feminist, but…” I couldn’t hear anything after that. Why are people apologizing for feminism? What did we do that was so wrong? Is it like saying, “I’m not a liberal, but…” or “I’m not into a classless society, but…”, or “I’m not anti-discriminatory on a racial basis but,… ” I blame Rush Limbaugh. Oh, so her defense (this friend of a friend) was:

Now I’m looking around this set of friends going, are there other sneaky feminist apologists here? Have I been blind?

Kittens
These are related.