Movie Update
My producer is doing a f-ing bang-up job nagging me to finish the screenplay, thanks Tink. I did some “thought work” while doing random errands this morning and landed on two superb ideas:
– I’m copping Hitchcock in a bookstore scene: the spy goes to the East Wind bookstore in Chinatown to find the meaning to the tea brick, and talks to Dr. Xiao, a famous sinologist. So, changing this to Dr. Bjornsen, because I’m the author and I’m Swedish, so in an almost entirely Asian-American cast there can be 1 honkey. Also, sinologists shouldn’t be Asian, because that doesn’t make a shitload of sense. I also like the idea that this Western guy is an expert in an adopted country- which is really what this entire thing is about, the cross over of cultures, locations, languages, and having an expert on Qin poetry and artifacts being Swedish, I mean, that rocks. 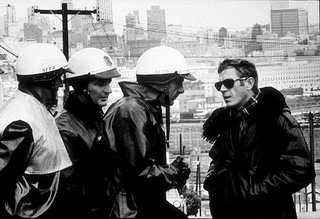 – I decided to insert a cool scene where I introduce Danielle the thai kickboxer (a real person, FYI, bouncer at Skylark) and the informant to the NSA. He’s going to be the long sideburned guy in Bullitt, the scene at Enrico’s. So why not film this exactly like in Bullitt? Excellent. Also changing his name from Danielle to Mikhail, or Sasha. Just add in some Russian nicknames (that make no sense) to further complicate a really complicated spy story. Yee-ha!