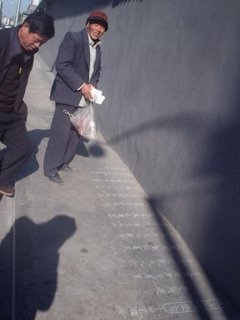 street poet/graffiti guy on the Calligraphy street in beijing

Endings
I revealed my brand spanking new endings to some readers last night and wow, were they unimpressed. In fact, one of the readers who had read at an earlier date said “I like the old ending better.” Argh.

Old ending: the American spy sits down with the Chinese assassin and they negotiate the transference of relics and kidnapped kids.

New ending: the Chinese assassin enters into the rebel territory and rapsodizes on the merits of ancient relics and language. b-o-r-i-n-g. Even I was bored, and I’m mainly just thrilled to hear people speak the lines.

So, next two days will be fraught with crazy hair-tearing and breast-beating as I try to figure out some good ending solution.

It’s strange how important endings are. If I go to a bad movie that is bad 98% of the way through, but has a really good ending, I’m happy. It’s what’s left in your mouth. Like a bad speech that ends with a good joke.