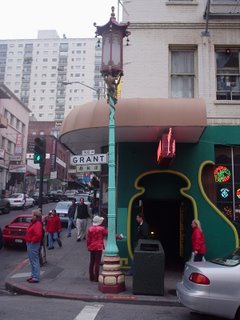 Locations
Scouted a location today. I had planned to meet the guy who is my connection to this bar, but he flaked. No problem, talked to the owner myself. There’s going to be some tough issues: lighting, and dealing with the public. I wanted to get the entire place to ourselves for filming, but he wants it to remain open. That’s just a huge bummer. I may go across the street to Li Po. Funny, the guy initially thought I wanted him to be in the movie. Seriously, right off the bat, right after I said, “I’m making an internet movie,” he launches into how he can’t do it, and how others have asked him to be in … video games or something. I finally was like, I haven’t asked you a question yet, what did you think I was asking you? And he finally admits he thought I wanted him to be in the movie. This guy is a crackup. So communication already isn’t so hot. At least I have this friend that can mediate a bit.

The decor is exactly as I remembered, and it does seem more real now that I’ve figured out a schedule with this guy. We can shoot 10pm on Mon, Tues, Wed. I wanted to do during the day, since that’s when the drama occurs, but he wants at night for some random reason. I think I’m on negotiation 1 of 10. Joy.