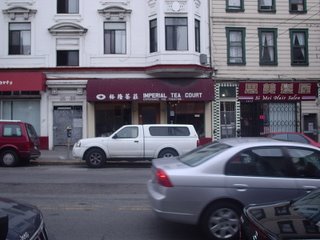 Trying to find the screenplay to Pushing Hands online. I did get this interview with James Schamus, which is quite good. He’s the producer of two Lee movies, and works/owns Good Machine. He discusses working with Ang Lee on the Chinese and English movie screenplay. It went back and forth a lot, I take it. Schamus would write it in English, send it to the translator, then on to Anglee and sometimes another writer, Peng, then they would do their rewrites, then send it to another translator, getting it back into English, etc. This happened for Wedding Banquet too.

I borrowed the Chinese version of Pushing Hands from the library. that means half of it is in English, not dubbed thank god, and the rest is in Mandarin, with Chinese subtitltes. Tough, because I kept on putting the movie on pause so I could slowly work through the subtitles. My Chinese is not that good, oh no. So I thought I’d read the screenplay just to see what I missed.

I’m really tempted to take out my first scene with dialogue, that is all in Chinese. I also am working harder on different voices. Vincent is no longer silly flaming NSA supervisor, but now a succinct-talking, humorless one. I got tired of the camp and I couldn’t go anywhere with it. I think that puts into relief nicely the sloppy spywork of the lead.

I read a review of John Rain’s new book, The Last Assassin, in his series about beinga mercenary in Tokyo. I learned that he is an ex-CIA operative. It’s far trashier than mine, but his character’s antics are very authentic feeling and quick in action. I guess I just am torn between making fun of the cold war/60s spy genre, and yet wanting to be in the world at the same time.

Oh, so I had a week or so of hand injury and didn’t write. That coincided with a huge un-excited feeling about the project. I had a big turnaround the other night talking to this guy about his novel that is about to be published. It sounds fun, and I’m eager to read it. Usually conversations with writers have the completely opposite result than this one. Not sure why. He was pretty burned out on rewrites, and we talked process for a while. Maybe the difference here is that he was entering postpartum and his novel was whimsical and funny, and I tend to identify strongly with both of those aspects. Not sure.