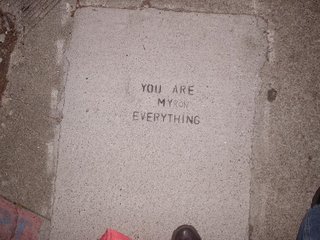 Movie Update: Information Kills
One of the actors told me, “you need to figure out what this is about.” Another friend who read a bunch of male parts for me, despite being a woman, and that is an irrelevant fact anyways, she said: “You have so much going on, if you chose one thing and ran with it, that would be good.” You can interpret that feedback various ways. I really like multi-layered texts. I also think that with Internet movies, because the audience can replay the bits over and over again, you can really pack in a lot. So in a way, I’m not going to reduce the layers of complexity. I think it’s very valuable feedback, though. How I’m going to use it, is this way. They weren’t getting a dominant narrative, or storyline, from the screenplay. So I need to make one dominant.

The title here, information kills, is about an idea I got on a walk around Aquatic Park tonight. I had just watched the lastest Battlestar Gallactica, well, latest for me, the one called “Downloaded,” In all the other episodes, this one human has a Cylon girlfriend in his head, showing up like a hallucination interacting with him all the time, like Harvey the big rabbit movie. In this episode, you are in the Cylon perspective, and you have a neat reversal, where the Cylon has a human apparition interacting with her all the time. So what I’m thinking of doing is taking the other spy, the one that doesn’t kill, and showing how her NSA ties with information does kill. The Chinese spy: an assassin, the American spy: an information hustler, which causes death. So yes, disseminating information, is it as deadly as real weapons?

Also, saw a film crew on the Pier, and realized they probably don’t need a license out there since it’s all pedestrian. Score!