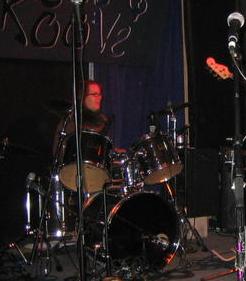 Musical Pursuits
I had lunch today at a new contract, RightRound– indie music from the inside. Fantastic vocalist and lead editor asked me the eternal question, “What instrument do you play?” and I had a long rambly answer. Basically I suck at them all, similar to my language abilities. Real lessons? Started with piano lessons, moved to cello. On my own time? Fiddled with the bass, acoustic guitar, electric guitar, harmonica, accordian, once a hammer dulcimer, and I have always owned a mouth harp and did not know what to do with it.

Recently I attended a Blue Bear Music show of a friend’s and after the gig(s), the instruments lay around. A few of us climbed up and took up different stuff, then rotated every few non-songs. My favorite bit was on the drums, where I was actually taking cues from the audience on how to play the drums. Wow, drums are fun.

I have always admired people’s aptitude with music- I haven’t had the mesmerizing ability I’ve seen others have. Friend from high school came over one day after school and just played jazz. On our piano, playing stuff he made up. Family gathered around and we were all duly amazed. An ex is a very talented jazz pianist and also had that ability to play that just doesn’t sound like it’s coming from him. He would direct the rest of his jazz trio from the keyboard, while playing this great stuff. A pianist in theater would play any bit from the play, on command, over and over again, and not really mind it, either. I lived with self-learned acoustic guitarists who taught themselves by simply listening to the radio.

Maybe there’s one moment where I didn’t completely suck at a given instrument. I had a band, Fingerhut, and we had a web site, haha. We never performed and only practiced a few times. It was the band where everyone played an instrument that they wanted to play, but weren’t very good at. So the talented bassist played drums, another good bassist played guitar, and I played whatever was left (rhythm guitar and/or bass). At one point we had a keyboard and I had been listening to a lot of Beastie Boys, and they sample some really good jazz organ (Jimmy Smith), so I guess I was riffing off of that. The two other band members were quiet, watching me, when I looked up, and realized, hey, I must not have completely sucked at that! Unfortunately when they asked me to play it again I had no idea what I had played. No control, so sad.