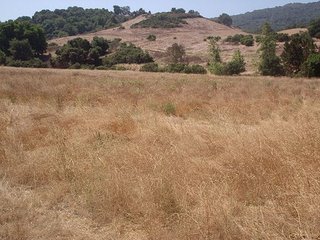 Dot Com Style
I sit here, 7PM on a Friday, trapped in Emery-Bored, as a A’s vs. Giants’ game is clogging up my Bay Bridge.

I’m faithfully reading Boing Boing, and this article in particular.

notes by Paul De Filipp0 (taken from Boing Boing link) regarding the editorial style of Wired:

* All references to “the little people” were eliminated.
* Ambiguity was minimized.
* Facts were cloaked in “hipness.” I
* The past was dismissed as unimportant.
* Quotidian matters were de-emphasized.
* Drama was injected into basically undramatic situations.

(back to me)
This one set of bullet points leads me to an epiphany-like moment. It’s a writer’s diagnosis of Wired magazine’s editorial style. To me, though, it seems like the general attitude of all people caught up in the dot-com, high-tech fueld enthusiasm of, I don’t know what, hope for fame, lure of vast riches, or perhaps just recognition that they made this widget at this time. A desk blotter calendar hangs on the wall in the cafeteria here, covered in signatures. It marks the launch of a successful dot com (that has thus been absorbed by a large corporation) and everyone has signed their name as perhaps a fulfilling of the moment, but also, in my mind, as an insecure marker of “Hey! I was here! Really!”