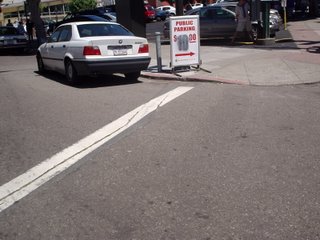 Things that are just hugely, hugely pissing me off today.

1. Cafe Columbus, who I have touted on various Yelp & SF Metblogs, has not only re-named their schwerma item some cheesy Italian name- The ‘Joe DiMaggio,’ which will come up again- but also ratcheted up the price one dollar. “We haven’t changed our prices in three years,” was what the manager told me. Don’t they know that their schwermas are now even more expensive than anywhere else in SF? Before, I could stomach 2$ more than truly med, but 3$? I want to take back my reviews. Not only are they not embracing their Northern African/Middle Eastern (it’s unclear to me) roots, but they’re going for the cheesy Italian stuff that honestly, North Beach already has enough of. I want to grab the grandmother they have chained in the back making schwermas and knock some sense into her.

3. France lost. I mean, I like Zizane. Why was he such an idiot?

4. Soccer fans scare me and now they’re all over the neighborhood.

5. My trash bags keep ripping and little food bits go in the can, and then they decay and smell bad. I hate that!

7. Despite being on a new training schedule I haven’t lost any weight. It sucks! It’s all pointless! I want chocolate!

8. I got a huge cramp in my calf this morning stumbling to get the paper.

9. People call me, when I’m having an allergy attack. I hate that.

10. The parking lot photo above changes its prices depending on the activity level in the neighborhood. I hate that! 10$ on low weekends 20$ on busy weekends. Lame.