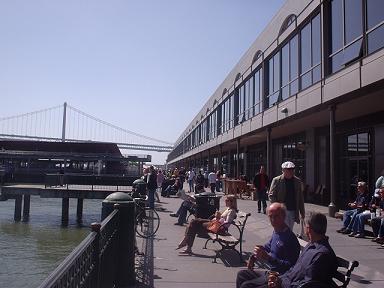 iMurder: the second in a series about a murder, dot-com style.Start at the beginning

Mac’s alarm clock function on his cell phone went off at 8am and woke them both up. Beth got ready quickly. They barely exchanged any words, something about how he didn’t have any meetings that morning, and hoped she had a good swim. She was on the J Church, when she finally wiped the sleep from her eyes. She got into the YMCA pool and it was full of the die-hard swimmers. They were usually in their 50s, serious about their health and disciplined. Just being in the same pool made her feel serious too.

She stood outside the gym, in the deep fog, and stretched. Every muscle in her body felt slightly stretched. With this chill morning, it must be broiling in the Central Valley, she thought. She walked a few blocks to the Ferry Building Peets’ and got an au lait. She sat at the public tables and watched the ferry dock. Floods of North County commuters filled the hallways, then in no time, it was empty and quiet again.

She read a discarded newspaper. A homicide was discovered yesterday morning at Fort Point. What made it curious, to her, was that the victim was unidentified, a white woman, and rather young. You didn’t really see that kind of demographic in the homicide news lately. Oh, and the disturbing bit about how the victim had been wearing red Doc Martens. “Cherry Smooth,” her friend Jelly used to say, “not just red!”. They thought it was so fucking punk then, wearing shit-kicking steel-toed boots.

Jelly was one of those friends that stuck around, despite the ups and downs of living in the city. She had started as a bike messenger, then after a dozen or so jobs, she was working for Mac as a programer. He had a web 2.0 start-up in the Mission District. She sent him a quick text message, hoping that if he confirmed that Jelly was sitting next to him, working, that the feeling of dread in her stomach would go away.

IS JELLY THERE YET?

They joked frequently about how late she came into work. Sometimes he even setup meetings early in the day to get her in.

NO, PROBABLY WORKING FROM HOME.

HAS SHE CHATTED YOU TODAY? Beth wrote back.

NO, PROBABLY HAD A LATE NIGHT. He replied.

The feeling in her stomach didn’t go away. She’d write Jelly an email once she got home. She rarely resorted to phoning people, hoping that email and SMS would suffice. Jelly hated phones as much as Beth did. She wrote Jelly a tepid message to “call her” the minute she got it. Then, Beth decided to pay a visit to the Central Precinct. She’d done Citizen’s Class there last year- a tour of the workings of the precinct for concerned neighbors, and knew that this conversation would be longer than a 911 call.