iMurder 4: Salsa in the Fog 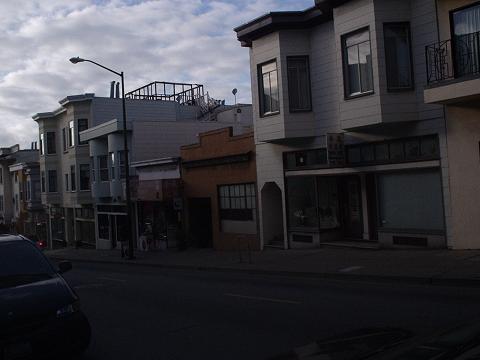 iMurder: the fourth in a series about murder, dot-com style. Start at the beginning.

Chapter 4: Salsa in the Fog

The stretch of five days of fog didn’t stop the Fillmore Street Festival from unfurling her band stages. Beth was navigating the crowds when she saw her salsa teacher, SF PD Detective Sosa, and his wife doing a very skillful salsa dance on the stage of a Latin Jazz band. Beth felt guilty at not attending his class in over a month.

She looked around at the other dancers then turned back to watch him and his wife, when she discovered he was standing by her side.

“A good dancer knows how to make his partner feel relaxed, don’t worry.” He led her out to the tiny floor surrounded with throngs of people.

“The first iMurder victim, I knew her.” Beth said.

She regretted talking since she kept losing the beat. “Uh, we were friends, since college.”

“I’m sorry about your loss.”

“Thanks. Do you, um, know anything beyond what I read in the paper?”

“Well, we just found out that the victim, I mean, your friend, she didn’t fall from the bridge like we thought at first. She was pushed off of the top of Fort Point.”

“Wow.” Beth thought about that. Ever since she heard of the way her friend’s body was positioned on the boulders, the original idea that she had jumped from the bridge just didn’t seem right.

Sosa continued. “The coroner said that her body had never been submerged in water, just splashed. Then, they realized that she fell from a much shorter height, 40 or so feet, instead of 200 feet.”

He turned her around a few times. “I never really thought she fell from the bridge. For one thing, it’s not open to pedestrians on that day, Tuesday.”

“Are you sure you’re OK talking about this?”

“Yeah, I just can’t talk and dance at the same time.” They both laughed, and thankfully the music ended. Sosa led her over to his wife and some other SFPD folks. Sosa’s wife offered her a clear plastic glass full of tequila and margarita mix. “It’s too cold to drink this, but I can’t dance without a little lime, you know?”

Beth smiled and took the drink. “If they offered these at the Y you’d get a lot more people in your class! Not that you need it, it’s pretty booked already. Hey, Jelly’s wake is tomorrow. Do you guys normally go to wakes? I mean, you know, to see who comes.”

“Yeah, we’ll probably show up. Me and Mikey over there, he’s a detective too.” Mikey was about half Sosa’s forty years, and was leaning against a Thai satay stall, chatting up some girls who wore tube tops despite the freezing weather.

“Um, it’s at Zeitgeist, you know, that biker bar on Valencia.”

Sosa pulled on a fleece. He was cold now that he stopped dancing. “That’s odd. I guess they got cleared to reopen for business.”

Sosa told her about the guy in the Port-A-Potty.

At Zeitgeist the next day, Beth scooted into the picnic bench next to Mac. “Isn’t it kind of morbid to have Jelly’s wake here at Zeitgeist, I mean after…” She gestured at the Port-A-Potty.

“What?” Mac poured her a pint.

“You know- that guy, the second iMurder victim. Joe Standish?”

“They never said what bar it was at. And not a porta-potty. Oh man, poor Joe, what a way to go.”

“I don’t get why SuperDevHouse was here anyway. I mean, a bunch of wealthy EMO dudes with ironic t-shirts – that’s just bait to the bikers. And it was so foggy that day, why would you want to sit out in the cold?”

“I also can’t believe they’re linking these two murders. I mean, they think Jelly is some computer geek?!!? I mean, she’s so much more than that.”

They raised their glasses, “To Jelly.”

Next, Chapter 5 “Hopping On Your Wireless”