iMurder 5: Hopping on Your Wireless 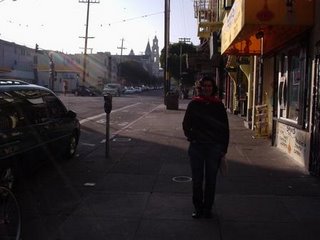 iMurder: the fifth in a series about murder, dot-com style.Start at the beginning.

Hopping On Your Wireless

Elfin walked into the Starbucks on Potrero. It was actually on Mariposa but he always thought of it as “that Starbucks.” It was big and anonymous, and better yet it was full of marks. People he could use to get online without leaving a trace.

He swung his backpack down on a nearby table and took out his ultraslim Toshiba. He had ordered a quadruple shot espresso and a brownie. Finally some underage delivered his order and he stretched his long legs out on the desk and leaned back against a pillar, making sure his screen was invisible to the other patrons. He got his domestically illegal cell phone out and started a trace on all packets in the area.

He found one in a few minutes. A girl in the corner, probably, the one with the earbuds and dyed red hair. Maybe he’d treat her with a “hey” on his way out. She had logged into sfgate’s employee VPN without encryption and he could jump on that. He logged into his text-only email client and read his latest request. A few chumps, get into their email, find out some dirt, forward the good stuff. He liked that about his job, finding out secrets and stuff and then seeing it printed a few days later in the Silicon Valley gossip column. He wouldn’t read it otherwise, for reals. He usually just read Slashdot and Boing Boing.

The espresso was making him freaky so he finished up his work in an hour, hit the can, then grabbed the bus for Hunter’s Point. He had band practice and he was jonesing to beat the shit out of some drums.