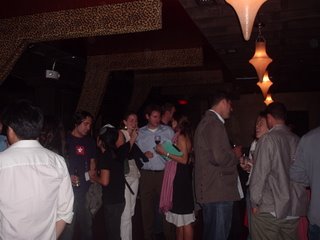 The seventh in a series about murder, dot-com style. Start at the beginning.

Beth craned her neck over Mac’s shoulder to see who else was here at 15 Romolo. The bar was dark inside, with tiny lights on tables. She could barely make out anyone distinctly, and she needed to find a diminutive Chinese girl named poobar. Her name was Diane, not that that little piece of informaiton was helpful here.

Mac was talking to a journalist about his company and boring Beth to tears. She glided away and they didn’t even bat an eye. She stood at the bar and listened to a conversation between a few other types.

“Dude, it was awesome. Totally.” Said a twentysomething man in a pink striped shirt, and short hair gelled straight up.

“So what did you say?” The other guy said. He wore a t-shirt that said: “foo bar.” Beth thought it was kind of a pointless reference. At least poobar was trying to merge “foo bar” and “pooh bear”. “Foo bar” meant “x and y” two examples in most programming books.

“Well, she thinks she knows everything, but she just started a month ago.”

“Yeah, and we’ve been there at least 6 months.”

“Totally lame. I hope she quits. I sent her this anonymous chat, like, get the fuck out of here, you don’t know anything, shit like that.”

“Um,” Beth asked, “Have you guys gotten drinks? I can’t get this guy’s attention.” The bartender had to serve a string of ten people before he’d ever reach Beth.

Beth was dying to know where these guys worked. Mac would know. But before that, she wanted to narrow down some of the information she had gotten from Sosa. The first tip that she had recieved from Sosa mentioned a love triangle between poobar, Jelly, and some guy named Jeremy. Jelly had never mentioned Jeremy, but they had moved apart, and no longer shared daily confessionals about all the guys Jelly met. Jelly was cute, and had no problem meeting guys in her day to day routines. The tip was from an anonymous caller, saying something about how Jelly had stolen a guy from poobar, and poobar had posted some pissed off stuff online, that she had taken down days later.

She finally got to order a glass of wine and circled around the room looking for this poobar. Magically turning around a column she saw what must be poobar, talking to a tall skinny guy.

“It was like, so adorable! A little puppy, with big eyes, and hanging from a bar, saying ‘hang in there!’” She hung from imaginary pole in an impersonation.

“Do you want another gimlet?” The guy said.

poobar nodded and watched him walk towards the bar. Beth slipped into the vacancy. “Are you poobar?”

The petit woman looked up at Beth, who towered two feet above her. “Yeah.”

“I’m Beth, I used to work at Avatar, but I think I left before you started.”

“Oh yeah…” Thus led to a name game of ten different engineers that Beth used to work with at her dot com that made her comfortably rich. Beth had learned that not only had working at Avatar made her rich, but connected her with other people that had started ten companies apiece, and now she had a network that was worth its weight in gold.

“Do you remember Jeremy?” Beth asked her. “I think I saw him the other day, at the Farmer’s Market.” Total lie, but safe, because who didn’t like to hit the fancy Farmer’s Market at the Ferry Building?

poobar looked down at her drink. It was going on empty. “I wonder where he’s gone with my drink.”

“The line is really long.” Beth had to steer it back to Jeremy. “Mac and I have been really freaking out about this Jelly thing. Did you know her? The first victim of the iMurder?”

poobar looked at her with big eyes. “Oh you knew her? I’m so sad for you!”

“Oh there he is! Lover!” The young man delivered her drink and she ruffled his hair. He had to lean over to let her do this. “This is Mark, he’s adorable, isn’t he? We like to walk around and just look at stuff. That’s how we met, at Burning Man. He was knitting, I was knitting, and then we talked about how we like to look at stuff.”

Beth smiled, and exclaimed that she better get another drink soon too. She realized she would never make a good detective. That interview had gone nowhere. Well, at least she knew that poobar did not want to talk about Jelly at all.

Next, Chapter 8, “Marina Boy Does Good”