What I Learned at WordCamp 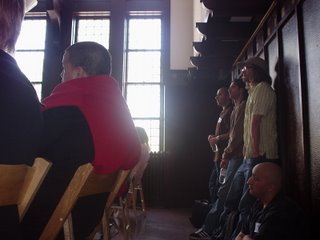 I went to WordCamp, which isn’t necessarily about words, but blogs. There are many who have already blogged about it, and even blogged about being blogged about. Because, what do you get if you put 100 narcissist, rabid self-documenters in one space for 12 hours? Lots of posts about it, real-time. She says, posting about two days later.

I learned a lot about blog posting, and I’m going to show you the tricks now:

Link a lot. Thanks Matt from WordPress for the event!

Create controversy. Chartreuse re-posted, sans permissino, a ton of photos of the very few women at the conference, and they’re pissed! Mainly, me! Does that I’m more of a whore for an audience? Perhaps! Lauren’s flickr stream was supposed to be just dopey fun, and now it’s on this weird chicks list. Oh well. I’m like 50% happy with the photos so I guess the glass is half full.

Have a lot of fun features on your blog. See this blog? I have none because I’m part of the evil corporate culture of Yahoo or MSN or whoever owns Blogger. (note: just moved blog, so no longer with corporate evilness and blandness.)

Tag well. I uploaded these photos and you can see I’m still learning the “art of the tag.”

Well tips over, now just for random funny bits from the conference:

Lisa Hightower raises her hand, and nobody picks her. I remembered my life in grammar school and never being picked. After she yelled about three times “ultimate tag warrior!” (the question was: what’s a plugin that you use) we finally started chanting it for her. See note about no women there- and definitely no special treatment (except for Chartreuse’s round-up).

Meeting a guy from Flock (see the link? I’m learning!). His name tag says: “Zbigniew” – I dare you to say it. I wouldn’t let him take it off because I could’t remember it. So he finally goes “people just call me Gandalf.” Finally found his blawg.

A question in the Information Architecture session: “OK, I have a post that is kind of, well, timeless.”

Being told by Om Malik to write a Inspector Monk mystery in the Web 2.0 world. I just… can’t … do… that. He did like my portapotty chapter of the iMurder series, that’s nice.

Talking to this guy from Word Press, and I don’t think we were at the same party. I mean, check Lauren’s post about how few women there were. Oh wait, I’m not thinking of the boy on boy action. Where are THOSE flickr shots?

OK then there’s a ton of these photos of my friend who I invited who started a blog about, hmm, a few months ago. Her blog: Good News For Optimists (well written and hilarious in its own right). She’s already a Blogebrity. more and more I think these conferences just go crazy and trigger-happy when a few women show up.

MyKin startup pitching an idea to an Important Journalist. Well, the funniest thing is that they’re sponsored by Quaker and so they got tons of cereal for this road trip to the West Coast. Needless to say the Cap’n Crunch went like wildfire, and Life is almost burned through. It’s going to be instant oatmeal all the way back to St. Louis (or Kansas, or wherever they’re from).