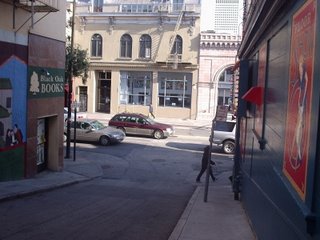 iMurder, the eighth in a series about murder, dot com style. Start at the beginning.

The knife plunged into her body and with it he heard a slight suction sound. No one would find her body, well, not while the party was going on downstairs. He wanted to wipe his bloody hands on his striped shirt, but it was 80 fucking dollars at Banana Republic and he wanted it to last a bit longer.

Poobar looked child-like and harmless there, lying on the hotel bed. Funny, ’cause was such a bitch in real life, dicking him over again and again with other guys. She just didn’t learn. Showing up at this place with a new boytoy, that tall kid. And with all his friends around. He just didn’t need this stress.

He rummaged through his pockets to find some way to link her to the iMurder victims. He found a business card from someone downtstairs and crammed it in her back pocket. That should lead the police in some wild goose chase. He had roofied her, then got her upstairs and sunk the knife in. He threw the knife out the back window out onto Romolo Alley. He washed his hands slowly. He left the hotel key on the bed and joined the party. He needed a whiskey.