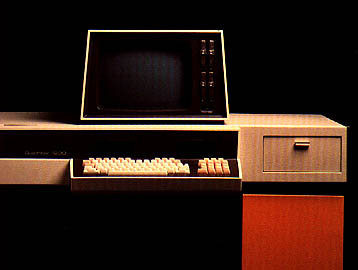 I was inspired by Chester’s post the other day, to write about growing up in a family business. The business started as an advertising TV Guide free magazine, then evolved into a typesetting business (see photo above). Typesetters were yet another casualty (thank god) to the Macintosh.

So, before PageMaker and the internet, if you had a restaurant and wanted to print out a menu, you would go to my Mom and she’d type it out for you on this huge clunky computer*, get it image-ready for the printers, and then send it to them. They’d print out a few proofs for you to check, then voila, two hundred menus later you were good to go. There’s a funny story about my mom and her head graphic artist going to a conference and seeing Pagemaker for the first time, looking at each other, and saying, “Let’s sell the business.”

Geeking out so hard on WordPress – and CSS- has made me think a lot about typesetting. When I showed my Mom the redesign of this site, she had a classic, font addict response, “You should use serif fonts for large bodies of text.” Sigh. She also was telling me about why it’s called “leading” – I wanted my links on the right to be tighter together line heights. She says, “That’s leading because in the old days pre-computer, they would put lead in between the sentences, as the wax was hot and would melt into each other.” “Printing. To provide space between (lines of type) with leads.” — Dictionary.com.

The only responsibility I got when I worked there was to clip the twines that held together the bundles of magazines, in the back of our pick-up. I get acute motion sickness so it was more like, watch the roads of Sunnyvale, Mountain View and Cupertino through the pickup’s back window, and in the parking lots of supermarkets, madly catch up with my rope-cutting duties. My sisters- the two oldest usually- had the delivery job and would drive the same route every week, dropping off the magazines. I learned how to play a mean game of cat’s cradle with those twines, which I would all knot together in a long rope. Fun times.

I guess I was getting in my mom’s way, because I started getting jobs. The most memorable was cleaning the sidewalk. Her office was a two-room ex-hair cutting space, on an alley in un-gentrified Murphy Street, near the train station in Sunnyvale. El Faro, the lighthouse, is a Mexican restaurant, still on that alley. One end was a photographer, whose work consisted mostly of topless women, and at the other end, a bookseller. I would scrape the gum off the pavement, then wash it down with a mop. The grease that came out of El Faro is, and was, a huge blob of oily, white substance. It never stopped. They had a cement step up to the back kitchen door, and into the alley that melted fat would ooze over the step and onto the alley sidewalk. Truly disgusting.

For a while Jenny, the daughter of the advertising woman, would come to work with her mom, and that was fun. The perk was to get a dollar and walk over to the Ultimate Cookie Company, where we would get cookies as large as our hand, hot from the oven, with big chocolate chips. Once my mom gave me ten dollars to get stamps at the post office. So I put the ten dollar bill in my pocket, and Jenny and I decide to “ride the dolly.” So you know a dolly is that tall metal push manual forklift, with wheels that helps you lift up boxes. One of us would sit Indian style on the bottom and the other would push it with as much force as our little 9 year-old muscles could muster. We got in some pretty big spills in the parking lot — you can get major gravel burns when you’re going that fast, so close to the ground. So we take the dolly out to the post office, and when I look in my pocket, the ten dollar bill is not there. Because when you’re sitting indian style, your pockets gape open, and it probably fell out. We retraced our steps and couldn’t find it. There were tears all around. My mom was not pleased.

I got to play office quite a bit, which explains how I learned to type really fast at an early age. Me banging away on the typewriter was one way to stay out of trouble, I guess. I stopped going to the office after school when I went one day with my cello. I got the privilege of being “first cello” in the junior orchestra, oh what an indicator of geekier things to come, and prized this rental junior cello I had. I must have looked funny because the cello was about as big as I was. After school, I usually took the 24 bus across town from Cupertino to Sunnyvale, a 45 minute ride, and it passed in front of Fremont High School. The kids on the bus would always tease me, and one day, poor cello got shit-kicked. It was rented, so to replace it cost maybe 100$ (that sticks out in my mind).

There’s something about growing up with a business. My sister right above me in age order ended up managing it in the final death throes, as my mom sold it. She was a junior in high school and already knew how to balance books, check inventory, and do payroll. We always had work to do for the business, and we were shown a lot of different career paths. My mom hired a nun, she hired her friends, she had to fire her friends, she managed a lot of issues in that business.

One of my other fond memories was tagging along with my dad as he did “sales.” I think he actually just went around to the Santa Clara Fairgrounds talking with the guys who collected stuff at the permanent flea market there. We would pick through tables and tables of old stuff in the big barn-like market they had that smelled of dust and mildew.