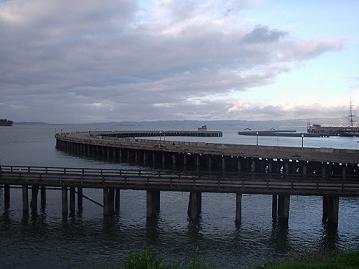 After she hung up with Sosa, she scoured the living room of Mac’s work and sure enough, found the moleskine wedged between two cushions of the Cat Pee couch. One of the resident cats had made sure that the couch was hers. Holding the book far from her, so she didn’t have to smell it, she dropped it by the corner into a plastic bag.

“Wait! Let’s check the day and see what her appointment was.” Mac said, rushing in from the other room. They took one of the other clear plastic bags — they had watched a lot of CSI — and carefully leafed through the pages. Jelly had left the string bookmark on the day of her death. In pencil, was written:

They looked at each other. “Fort Mason? She was found at Fort Point.”

“Maybe she wasn’t even supposed to die. Maybe she got caught up in, I don’t know, something else.” Mac was running his hand through his hair and looking around wildly. “This is so crazy! She shouldn’t have even been there! And who is Tom?”

“Mac, calm down. I’ll bring this to Sosa and he can look for finger prints or something. Let’s do it in the morning, it’s 3am now.”

Mac agreed and they started to pack up again.

She slept over at Mac’s that night. He lived so close to his work, and it was so late at night. They chit-chatted about his mail and recent packages, got into bed, and then the silence of Noe Valley descended on them like a wool blanket on a humid summer day.

Mac broke the silence. “It’s great you found that moleskine.”

“Yeah, I had a feeling that it was in that living room. Nobody had looked there.”

It was quite for twenty minutes or so, and Beth didn’t feel like making love or going to sleep. She was scouring her mind trying to figure out who Tom was.

“I never told you about that year.” Mac said, breaking the silence. He rolled over and faced her. “We weren’t getting along, remember, and I had that interview up in Portland. I met up with Jelly.”

Beth knew where this was going.

“No, I want to. It’s been so weird lately. I was with her, we were just trying it out. I mean, it was just that time.”

“I thought you were just not in love with me anymore. I didn’t know there was someone else, someone I knew. I even asked you, and you said there wasn’t anyone.”

Beth knew she had to ask, just for her own self-respect, but she really didn’t want to know. “Did you guys get together any time after that? Like in the last year?”

The hesitation in his voice didn’t help slow down her heart rate.

She jerked up from bed and stared at her feet. “I better go.”

“I can’t sleep anyways, I’m just going to go home and try to crash there.”

It was a feeble excuse, but she felt like she wasn’t old enough to have this conversation, at the age of thirty-five. “I still love you and all, I just want to be by myself now.”

Mac sighed and lay there. She knew, in the dark, his mouth was in a straight line, in the angry-quiet repose.

She finished dressing and grabbed her purse and jacket, kissed him, then left.

The LCD readout in the bus station told her that the J-Church trolley was going to be 95 minutes. She thought, this is a good time to look through the rest of Jelly’s moleskin, and figure out: who was Tom?