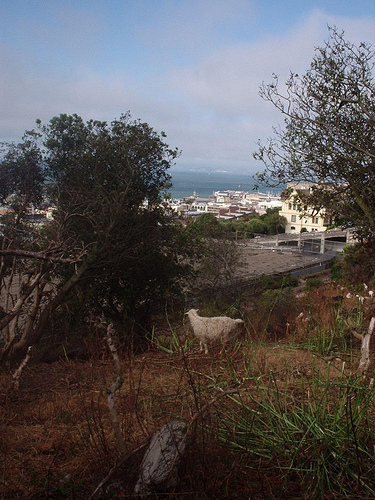 So I’m sitting at work desperately trying to get one last thing done, and I realize I’m quasi-doocing, the act of blogging while at work. Well I’m not blogging about work. Because it’s boring, and I’m not that dumb. Though I do want to take a photo of the Sanka sign above the coffee maker. Actually maybe one day I’ll blog entirely about “funny signs in work cafeterias” along the lines of “Your mother doesn’t work here,” and “Make weak coffee, die,” etc.

I love that photo of a goat I took this weekend. It’s a goat, mowing, on Russian Hill. This photo reminds me of the Dutch Masters, if I do say so myself, and picturesque in the artistic genre vs. the general descriptive way. My old crappy camera can just do amazing things once in a while. I’ll be sad when I replace it with a slimmer, more attractive, higher memory version. Despite that, my Nikon FM-2 is still a damn good camera and I bought that in 1988.

Got some bad news from le docteur last Thursday and it has put me in a mortality funk. What to do when you are out of control? Seek control. I’m banning all “whiny single girl” dialogue from my mind, and I plan on ignoring any of my friends that start the whirlpool of self-pity. Why? Because I’m going to redirect my energy to things that matter. Also, I’m starting the bike/run/swim trio of non-triathlon training. It’s a lifestyle, not a goal!

On that note, I swam in Aquatic Park on Saturday, (second time) and it was very, very thrilling. There’s something, in the whole control, or anti-control, theme that swimming in the ocean releases you from all this weird stress. I also have to fight against something way, way stronger than me. I had some logistical revelations: when I’m freezing in the water I don’t feel my housekeys I pin to my suit. Also, getting your skin so salty and abraded feels really good. I’m debating paying membership to the swimming club nearby, if but to use their lockers and hang out with other swimmers. It’s tough because Aquatic Park is only 4 blocks away and may not be worth the gym-fee. My goal is to get out there and swim with the “big kids” along the two buoy lines that span the little cove. On Saturday, I just swam back and forth right in front of the beach. It was surprisingly warm, an insight nobody is sharing with me, when I try to encourage them to go with me. I have to say my ears didn’t thaw out until two hours later.

Biking will be tougher without a good bike, but I just made a biking date with a neighbor. Though I did encourage her to have her dog pull us along Embarcadero, it will count as exercise.

I bought an extremely large, expensive television this weekend. It’s something to do with mortality and realizing that money in the bank is doing nobody any good. So, went to Circuit City and a nice, pimply, unobtrusive sales clerk did a good job of not upselling me so I dropped a wad. It gets delivered on Wed. Oh, to enjoy those costume dramas, erm, they’re called “heritage pieces” now, I’ve learned, in all 32 inch, HD, LCD glory. I can really check out the pattern of china in the teacups, now!