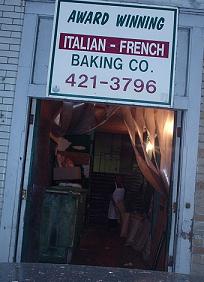 “You can’t shoot a great poet.”

– Samuel Hynes, New Yorker June 12, 2006 “Meeting E.P.” on how they couldn’t try Ezra Pound for treason for broadcasting for Mussolini. It’s true, you just can’t shoot a great poet. It’s like a visceral, innate impulse not to kill, great poets, that is.

I am thinking of writing a reading guide to the iMurder series, because it would be fun. A kind of character guide, location map, and list of ongoing clues.

Big topic last night at the SF Metblogs meet-up was whether what we do is journalism, and what the Metroblogs purpose is. Came to a rather general consensus that we can all have different styles, and voices. And yes, an event listing is done better by other people. And we don’t pretend to be journalists, but admit that people consider us that. And if we write very subjectively, and note that, that we can avoid some of the inherent authority given to us by the title “SF Metblogs” (or lack of authority? haha).

Funny quote from Jason- “We are broke!” – when Lauren requested some schwag. I was speaking “anna code” all night (too geeky, I guess) because she had to translate to the other writers “anna-ese”. When Jason said we had no money for schwag, I piped up with the idea that we could use the Japanese silk-screening manual thinger that was so popular at the Maker Faire. Gocco. Example of cool Gocco.