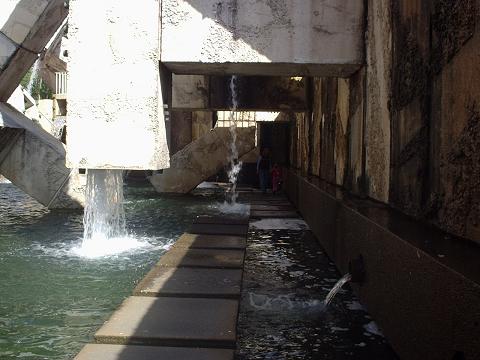 Beth wakes with a start, sweat pouring off her forehead. Her dream starts to fade, though it made her heart race faster than … she can’t think how fast her heart usually races. I mean, she never really stops and thinks: wow, I wonder how many beats per second my heart is pumping now?

She feels disoriented, and realizes it’s because she’s not at Mac’s, but at her apartment. It smells dusty. The parrots of Telegraph Hill are squawking with reckless abandon outside her window. She is really annoyed with them. Squinting around the room she sees piles of abandoned projects from her last break-up: bags of yarn for knitting a sweater, piles of big fat books she “should” read (‘The World is Flat’, ‘Extreme Pair Programming’, ‘How to Cook Locally, Eat Globally’…). Starting another pity spiral makes her tired.

Then she remembers she and Dt. Sosa are visiting GiggleLoop in an hour, and manages to shirk Relationship Depression enough to get showered and dressed.

She walks the couple of blocks to the Vallejo Street station. She has the moleskine and the photo in her purse. A few kids are in front of her on the sidewalk, near Jackson Street. They’re Asian, wearing dropped pants and no belt, with low slung back-packs. She hears one of them talking about ‘Getting their drank on…’ and a flashback to her dream stops her cold, on the sidewalk.

Something about Jelly dancing in Justin Herman Plaza, alone, with a huge audience sitting around watching her. SHe’s got her big red boots and she’s doing some two-step softshoe from Riverdance. Just when it’s getting good and Beth expects her to do a backflip or something (it is a dream, for Christssakes), Jelly stops, and, yelling at the corner of the plaza near Embarcadero 1, screaming for someone to “Get my camera!” She’s pointing at a young kid, who is darint through the city mall carrying Jelly’s messenger bag.

That’s it, Jelly’s bag, and Jelly’s camera. They’re also missing. It wasn’t just the moleskine, but the bag. Beth had a feeling whoever stole the bag was worried about what was in it.