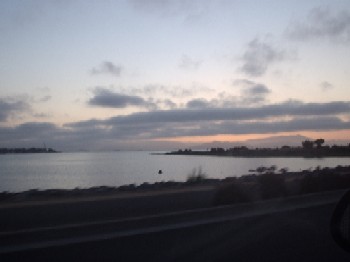 Met with an old friend (Beth, link on right) in from NYC, and she dropped a huge bomb on me: She’s started a publishing company. And she had a reading series, and it’s now huge. And she compiled an anthology, and wrote a novel. And, and, it was all so great! I was in super fatigue from not having slept the night before, but had pampered myself ridiculously that morning with a manipedi and champagne, with another old friend, so I could hobble into Rose Pistola and have a nice dinner, no problem.

10 years ago, Beth and I used to live one block from another in Lower Haight. I met her on this Reed-Yale-Oberlin party circuit when I first moved to San Francisco. We would bitch about our roommates, had massive crushes on everyone, and tried to find jobs that fit our Majors (ha!). They were heady times, and the Dot Com balloon (it’s not a bubble, is it) had yet to get pumped full of hot air.

As ever, I was working on a novel, on my Mom’s Mac Classic. The external drive had died one night, so I called a friend in Cupertino who worked on recovering data. Willie, sweetie that he was, drove up that night. I got really bad food poisoning from stealing a roommate’s old sausage pasta. While I’m sick in the bathroom, he’s opening up the case and investigating the drive.

I totally knew what it was. Lynx, my parents’ cat, loved to curl up on the computers since they were hot, throbbing heating pads, to her. She must have peed on it. Willie got really grossed out. He drives an hour to see his friend get sick, and then he ends up breathing in cat pee crystals.

Despite having a not-so-cutting-edge computer, I was pretty popular for being the only post-grad person with a computer. I lived with four poeple, and we all used one telephone line. So to get email, we had to move the computer into the hallway, hook-up my 3600 baud modem, remember to disconnect it to use the phone, and then telnet into my Reed alumni UNIX account. It quickly became the neighborhood “email computer.” Friends from three different houses would ended up using it when they visited, or maybe they visited to use it?

What Beth remembers isn’t the local inhouse technology but how once we danced to Abba with her roommates. I remember helping her make garlic soup- of all garlic, skins and all– in an attempt to detox one Sunday.

I have a memory of sitting at my desk, writing a check for $350 (my rent), and the minimum payment on a credit card ($17), that I had maxed on an attempt to live in Paris, and thinking of how I had to pay my student loan payment ($112), and how I wanted to go to Thai food this week, but I couldn’t afford it. My job paid 8$/hour, and I was barely making it. Ah, the good times.