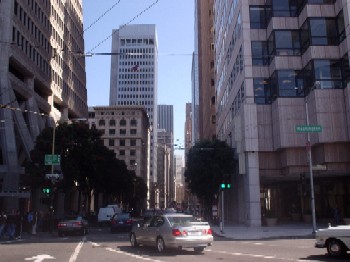 Beth tapped on the bulletproof glass of the Vallejo Station. She could see Sosa talking to a young man, in a suit.

The door to the main area finally opened and she stood face to face with Gavin Newsom, the young, hot and available mayor of San Francisco.

“Here you go.” He said. “Sorry to keep you waiting. Detective Sosa has told me you’ve been a key consultant on this case.”

Gavin shook her hand and left the office. Sosa stood in the doorway laughing. “You are bright, red. You’re about as red as that fire extinguisher.”

“Well, count yourself lucky. He didn’t give me the smile he gave you.” Sosa drew a hand through his hair. “I’ve been told to step up the manpower. I need to bring in some more people like you.” He pulled on his jacket. “Let’s get over to that Giggle place.”

They climbed in his unmarked Crown Vic, parked right on Jackson on a red strip, then drove with excruciating slowness down Columbus and past the TransAmerica Pyramid. Sosa did the “cop crawl”: one arm casually resting on the open window, his eyes scanning the pedestrians, and the other hand open on the wheel, cruising at ten miles per hour.

They parked in front of a fire hydrant, enforcing her view that the SFPD and SFFD really don’t like each other, and walked into the green glass skyscraper.

“How could a company with a Mickey Mouse name like GiggleLoop own this entire building?” Sosa said.

They announced themselves at the desk and stood near the elevators.

A young woman with a microscopic skirt swished over. “Are you, um, the po- I mean, Dt. Sosa?” She smiled, “Don’t want to make it appear like we’re doing anything wrong, you know.”
Melanie, as was her name, led them up to the tenth floor. In the elevator a flat panel TV told them NASDAQ, just in case they hadn’t caught the ten signs on the way down Columbus with the exact same information.

Melanie breathlessly, and yet, with the bored face of a tour guide, gave them the spiel: “GiggleLoop was founded in 1997 by two brothers in their dorm, you might know them, ” she smirked, ” Jack Adam and Mark Yeblemoff. Now we have 30,000 employees, around the world, and a net gross of five hundred million. We’re here.” Melanie pivoted quickly and left them alone.

Mark came out to the reception area, ogled Melanie’s behind in passing, then smiled and reached out to shake their hands.

“Hey Beth!” He said and shook hers. Beth controlled an impulse to wipe the sweat from Mark’s hand against her jeans.

“We’ll keep this short, Mark,” Sosa started. “I just wanted to ask you some questions about where you were last night. You were attending a “sloshcon,” correct? At the Basque Hotel?”

Mark looked at her oddly and then focused on Sosa. “Right. I was at that industry event. Then, I think I got a burrito with some pals afterward, and headed home. Listen, I’m on deadline here, we’ve got some seriously cool shit going on and I’m…” he checked his watch…” triple-booked.”

Sosa continued. “We are investingating a woman’s death, name of Poobar. Folks at the party seem to think you were, involved.”

Mark waved an arm around. “Sure, who wasn’t, with her? It was years ago. She was cute, but I just moved on. I’m more into, like mature, more knowledgeable and secure women.” He looked at Beth in a look that could be decribed, in romance literature, as “smoldering.”

“Listen, though, why don’t you trot over to Peets and we’ll meet in, say twenty minutes? I’ll wrap up some stuff and then we can really get into this.”

Sosa closed his little notebook and looked at Beth. “I can’t force you to talk to us right now, but I can…”

“I will!” Mark interrupted, “… just give me some time to pop into this meeting.”

Mark practically ran away from them, and Sosa leaned in to Beth: “He’s doing a runner.”

Sosa called his office and started the paperwork for an official arrest. “I’ll just sound out the DA and we’ll start.”

Beth was worried. “What about evidence? I just don’t understand how he’s related to Jelly.”

“I’m going to book him for Diane, or what’s her cute name, Poobar’s, murder.”

Beth rolled her eyes. “It’s all related, I wish you guys would realize that. In the mean time, I have some great clues.”

Sosa pushed the down button on the elevator. “Why didn’t you say so earlier? Amateurs!”