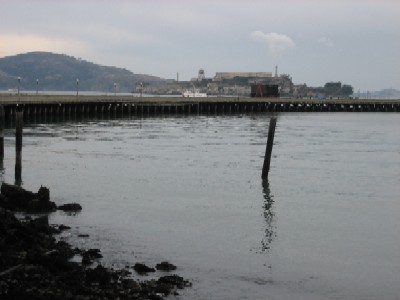 He remembered the muggy warmth of that night. It was the beginning of a long fogwave. First foggy day in what would be three weeks of fog, that nicely coincided with the string of murders sweeping the city. He hadn’t known all that though. At that moment, he was in the pit of his own personal hell. He thought, for a few hours at least, that there was a light at the end of the tunnel. But then that light was snuffed out, and he had taken his destiny into his own hands. And the minute he did that, the fates had something else in store for him- those silly hags- and there she was, that Jelly girl, sitting on the top of Fort Point listening to her iPod, so close to the edge. The battery had armament mounts posted in a circle around the roof. She was sitting on one, looking out to the Pacific- a great view beyond the Bridge- though you couldn’t see anything now with the heavy fog. She didn’t hear him approach and push her over. She was light; she was easy to push. Her scream peirced the air right when a foghorn blast sounded from Alcatraz. He wiped his hands on his pants, even though there was no blood.