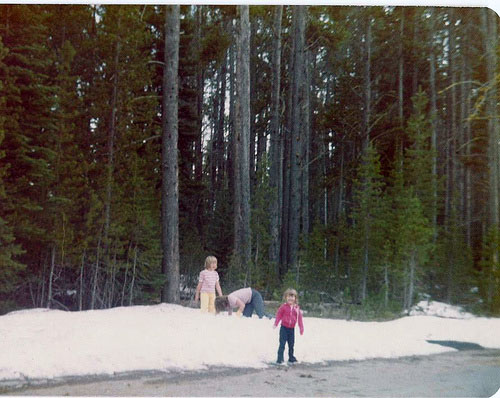 I remember all the kids in third grade getting to be models for the local ski shop, Any Mountain. Well, it seemed like all the kids but me! My family didn’t ski. We went once to a hotel up in Tahoe that my mom got for some barter advertising deal in her magazine, and we rented skiis and ended up flailing around in the snow on a meadow. We were laughing so hard that we couldn’t get up off of snow. That’s what I remember, at least, and playing a lot of poker in our hotel room. For being such sheltered, late-blooming, wallflower nerdy girls, we learned a lot of different poker games. Southern cross is still my fave. Anyways.

I went skiing with some friends many, many years ago, and it was dreadful, but as I was driving away from Sugar Bowl, I was thinking, I gotta get back here. Why was it so awful? I was sitting in an SUV next to a woman who did NOT stop talking, the entire way up. Most of it was, “Anna, why aren’t you talking to me?” etc. Granted, she had a sucky seat in the middle, but still. My feet hurt really bad in the rental shoes, and I was so out of it and weird that I didn’t recognize it, and skiied crying the entire time. We were on a very technical back-country route with lots of little ups and downs- no smooth gliding on lake paths. I had just broken up with a guy, and while it sounds like a good idea to go out with your friends on a long excursion directly after a breakup, DON’T. You will be mopey and pathetic and make everyone’s life miserable. I have stupidly done this twice and won’t do it again! Yes, go out and party and have a good time, but have the presence of mind to stay in town. Compounded with self-pity will be claustrophobia and irritability. Oh, and the place we were staying was a Sierra Club lodge with very lukewarm hot tub that had been used by numerous people before us.

The best bits were sitting around the fire in the evening. I liked the mandatory KP too- talking to the guy who worked in the lodge year round, and how he had just gotten away from everything by doing this. I liked the ski rental area and the classes. There’s something warm and safe and rustic about ski lodges no matter where they are. Some technologies just don’t change- so it’s all really sensible and no-nonsense and old. I also like the rugged red-faced feeling of exercising out in the snow all afternoon, and coming back so insanely hungry and muscle weary.

We all stopped in at Squaw on that trip and had a nice dinner at Plumpjack. That seems like an oddly indulgent thing to do for us, but we were dot-commers, and despite being fresh out of college and sure poverty with our English degrees, it’s like we knew we’d have money some day.