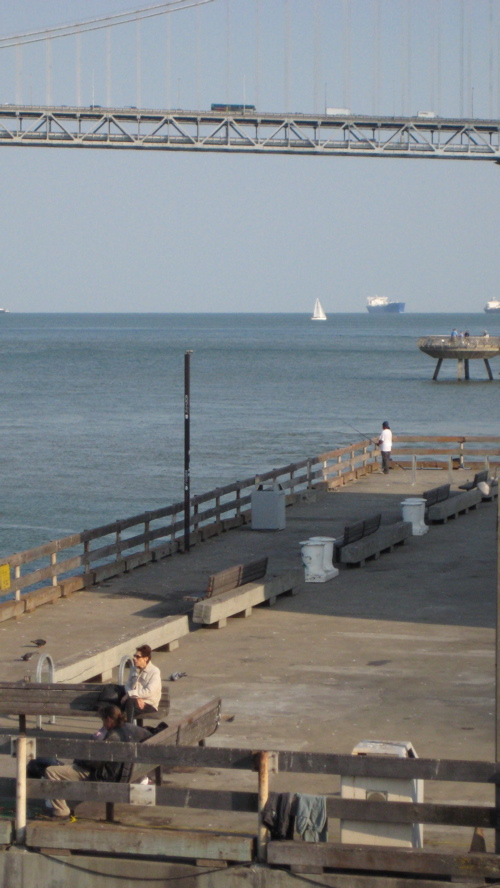 Just finished reading Penelope Trunk’s 9/11 Memoir. I had no idea she was in the heart of it. Reading that reminded me of my experience of the day, when you think of yourself at the same moment, 2000 miles away.

I was on a rare break between West Coast contracts and grounded. The place where I worked had a small office in New York, across from the World Trade Center. Otherwise, I never would have known what that building was, except that my coworkers in New York talked about it all the time. My housemate and I got a phone call around 7am, it was her boyfriend, who was telling her to turn on the TV. We walked into the living room, turned on the TV, and in our pajamas, with quilts around us, we watched that bizarre, grotesque live feed of the second plane flying into the building. Wishing and hoping it was just a re-run, but noticing enough details to know it was live, and a second plane.

Against my roommate’s advice, I went downtown to participate in a conference call with AAA. She thought I shouldn’t go in the underground, and that all cities would be targets. I thought that it was provincial to think that SF would be anywhere near a target like the WTC, and, in the odd way that you have priorities in times of disaster, I thought that work, and this meeting, was a priority. Well it was pointless since buildings downtown were being evacuated. The main office in Boston called around to get a headcount, since we were all traveling consultants, and that’s when we found out that the NYC coworkers were missing. They turned up safe, hours later, having walked across the Brooklyn Bridge. Some of the SF folks went to Crossroads Cafe on the Embarcadero and yes, I remember what we ordered, too: banana splits. My friend and coworker was waiting to hear from her sister, who worked in the WTC and hadn’t gotten in touch. So we ate sundaes. She turned out OK, too.

A few years later, I was at a party talking to a friend and his sister, asking why they moved from NYC. “9/11.” And you don’t really have anything to say, because you don’t want to really know, unless they want to tell you.

I think of Loma Prieta, and how disastrous it was, and how important really, in my life, and how acts of God are easier to deal with (as I think they are random and/or completely out of my control) unlike 9/11, where those were perpetrated by people and influenced by people, and generally, not totally out of our control. And then there are things like Katrina that are a mixed bag of culpability and randomness.