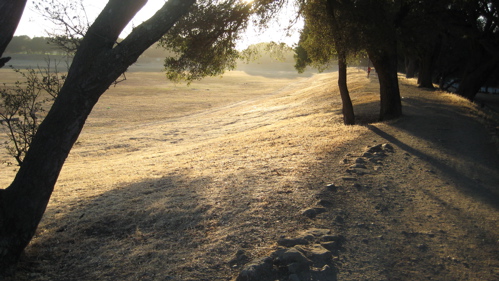 I’m visiting old friends, and they’re showing me around their new house in Santa Clara. While we reminisce, her husband starts cleaning the pool. He drags the net, on a long pole, slowly around the surface.
I make some quick remark about how it’s like a zen sand garden. I’m in the sun, shielding my face from the bright south bay rays. I’m dressed for the city, long sleeved shirt. It is September, but it’s still broiling down here.

He disappears to a small shed nearby. After a while she and I want to start the tour again, and she calls his name to see if he wants to join us.

“A bird’s caught in here. It’s bony. Something bony got stuck.” He said, muffled, from the shack.

We collectively grimace but I’m intrigued. How does that happen? He vacuums out the other side of the filter hose.

She explains how it’s a lot of work, and “We didn’t want a pool, we just liked the house, and it had a pool.”

Both of us tried out for swim team. She got in, and she said it turned her off of swimming for a long time. She’s just getting back into it, 15 or so years later. I had always thought that was the Big Flaw with my high school career, besides not getting into AP English & Calculus. Not wearing goggles during the swim tryouts, so I didn’t get in. I was close, Mr. Villareal said, just needed to get the goggles. You’d think he’d have accepted me anyways, since I’d trained all summer. But as in all things in that school, there were too many smart & athletic overachieving kids for Ms. Mediocrity. I’m not bitter, really. Walking the four or so odd miles home (through sleet and snow), my eyes burning from the over-chlorinated pool, and crying at the same time since I knew it wasn’t gonna happen.

I can see how not getting into the team has meant that I’ve swum for a long time, consistently during my life. My first job in the city, it was a great way to beat the afternoon dolldrums. I’d walk a few blocks to MacKesson building and get in fifty laps or so in the gym near the BART station. Moving to North Beach meant I could fulfill the dream of swimming in the ocean every day. Of course, the realization is that I do it about once a month.

She and I both agreed that having a pool was more work than just going to a community pool. I grew up with a very large community pool. No cleaning, no hassle. Just a fee, but great instructors and it was a social event, as well.

OK, off to Sports Basement buy a new swimsuit.