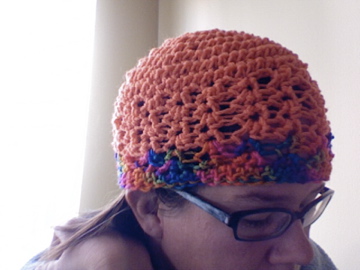 I love these kind of skull caps. It’s a riff on the 1920s style cloche (French for bell) hats. Funny to think this was a feminist icon for so long, when now it seems fuddy duddy (Thoroughly Modern Millie and Bernice Bobs Her Hair). The modern (or poor, in its time perhaps) variant is knit instead of felt. Which makes me think a felted knit one would be very cool. And molded to one’s head, ultra-cool.

Last time I crocheted I completed about 1/2 the project and realized I was crocheting left-handed reverse. This time, I finished the hat and realized I had done the wrong stitch- instead of double-crochet, I did a half-double-crochet. Math doesn’t work right in crafts, in that half a double crochet isn’t a single crochet. After many amazingly well done online tutorials, I managed to refresh the basics and I’m off to another hat. Based on YarnCat’s flapper patterns.