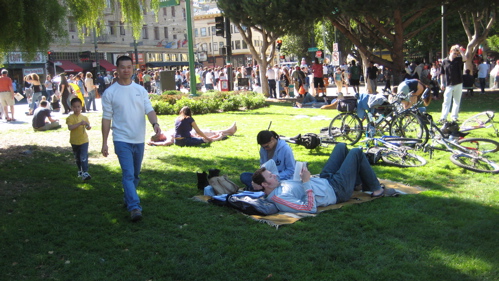 Working on a new novel in November as part of Nanowrimo. Kathy’s doing it over at More Good News for Optimists, so I thought I’d trail behind her like a sycophant. I mean, do it too. Unfortunately I get an idea a week on this novel. Title came first: Beer and Chocolate. I thought that up a few years ago walking home from sushi place, “I’d really like to write a novel with the title ‘Beer and Chocolate.’” But I was already working on a novel at that time. I think another one came out with a similar title, too. So now I get to use it. The deep story behind that title is that those are my comfort foods. A little jar of chocolate chips and a bottle of beer, yee ha.

At a party last night a guy I vaguely knew came into the room and greeted me, “Liz! Long time no see!” He apologized later, but I told him- that’s a great name for a woman my age/situation. It’s so hard to find believable character names. I’ve reused Cynthia a million times. The best character names are my sister’s friends from grade school. They have the ring of truth without being too far off sociopolitically & generationally, and, more importantly, they won’t hunt me down to find out why I wrote so unflatteringly about them.

So now, title and MC (main character) name. When I think “Liz” I think of Pride and Prejudice and Lizzie, so I could do a revamp of that old tale. I am the youngest of 4 sisters, so I could use that in a degree it’s the same. I’m unmarried, and that plays into the plot somewhat as well. I like having an open-ended plot walking into it, and just seeing where it goes. It does help to have a vague framework, though. OMG I just read the title, and this post is not about blogs vs. novels at all.

If you’ve read Journal of a Novel, by our own beloved Salinas-born John Steinbeck, you will readily see the relationship of blogs and novel writing. So he wrote East of Eden in notebooks, and on the flip side of the each page with a bit of novel on it, he wrote a letter to his editor about fascinating things like how his wife has switched the rugs in his study, or about how his son hasn’t come in for lunch. It’s hard to read the Journal straight through, as frequently he talks about the work of the day and how it works into the novel at the point he’s at. So you need to read East of Eden alongside it. It’s not really a postmodern nested narrative, but more of an interesting insight into the creative process. In the British Museum, I saw Jane Austen’s little drawings next to one of her novels (Mansfield Park, I believe), and her cute curly-cue letters. You really get the idea that she wrote this in a sitting room, with constant feedback from her nieces.

I like that model. So this novel will get written, perhaps on another blog or on this one with a different category, and I’m going to write little notes alongside it, definitely on this blog in the ‘About Writing’ category. In the weeks leading up to 11/1, I’m going to redesign this blog also. I will probably sideline Movie Haiku as it needs to be Ajaxified, and it’s a huge target of spam now, too.

Blog writing will go on hiatus- the TV movie reviews on Kulturblog, the workblog, SF Metblogs etc.- as I can’t possibly keep up the writing commitments. The brain goes through this weird focus spiral while writing novels. Blog posts are “be concise in 300 words or less,” “freedom to be snarky,” and “maintain the voice.” Novels are like a miniseries that you’re really involved in, and you want to get back to it. It’s the same amount of writing, but everything else is different. If you’ve ever done a long anything, a technical manual over 100 pages, or a painted piece that took you 3 months, you have an inkling what it’s like to write a novel. You paint yourself into the corner quite a bit, and you recognize great things you didn’t know you knew/though/remembered. Problems you encounter writing a novel are nothing like anything else, I’ve found. Tempo, arc resolutions, subtext, pacing (did I say that?), multiple voices, etc. I miss that, and I love the structure of Nanowrimo, so that’s why I’m going back at it.