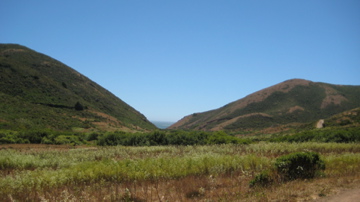 From Beer and Chocolate

They drove through the city for a half hour and then across the Golden Gate Bridge, up 101 for another half hour until they were in the acres and acres of neatly laid out symmetrical rows of vines. She breathed in and tried to notice what was so different. The sea air was gone, replaced with the heavy, sweet smell of grapes in the air. Melanie swung off into some small drive lined with eucalyptus, and the air jsut as quickly changed from heavy and sweet to a minty menthol of the trees. Driving under the shade of the huge grey giants, Liz was instantly cool and refreshed, she wondered who you had to screw to get a life like this.

Yesterday it was hard to get in the mood, today it’s not so hard. Probably because I beat down the demon of word deficit and have a manageable amount to do today. Also, because I stuck to a formula that totally works- for me. Exercise, and meditation. But first, after writing last night I got that little inner critic that says, “God it’s such awful writing.” And then, to impress that upon me, TV is having this writer’s walkout in Hollywood (yay!) and TV sucks, and there are examples of TV and movies having bad writing, namely, the Diane Keaton, Mandy Moore vehicle, “Because I Said So…” TV Guide gives it 1 star. That’s amazing, because TV Guide is really generous with their stars if there’s some semblance of a respectable cast. I still gave it a chance a few times. But it had that cringing, “Oh I hope this doesn’t continue,” kind of reader/listener response. The men in her life unrealistically linger over her flaws. Yet another chick flick movie where the heroine is clutsy. Why do they pick that flaw, to make her human? It’s like serial killer movies in the 90s. Totally overused. I guess they don’t have enough time and energy to just make the heroine a normal person without all perfection and one flaw.

Meditation- next to exercise, it’s so great. Something about it, it takes that compulsive streak and just squashes it. It’s almost like your mind is this needly little child, responding to emails and chats, desiring things like caffeine and constant diversion, and meditation sits down, gives it a little forum, and then it’s gone. Ritalin, in New Agey PC mode. I had a breakthrough thought that I’d dedicate my meditation today to some novel idea, and then I instantly was like- no, the purpose of this is to free up other things so I can focus on the novel. I’m also not so advanced that I can really do meaningful meditation on subjects. I’m still in the “freeing the mind” stage.

So the combination of meditation & bad writing in this post is about acknowledging that you have a very outspoken inner critic, and establishing a speaking relationship with him (for me, it’s a guy). Don’t let him dominate the conversation, but he has interesting feedback.

I think I like this excerpt better. Liz comes home around 2am and finds her sister Dani, crashing at her apartment.

“Dani stop yelling!” Liz walked down the hallway to her room and dropped her purse and mail, kicked off her shoes and pulled on some sweats too.

“SORRY MY EARS ARE SHOT.”

“PUT ONE IN FOR ME.” Liz yelled, and soon heard Dani tossing in another corn dog on the cookie sheet. She walked back to the kitchen and sat at her dinette chrome set. She loved this crappy 1940s table and chairs. the squeaks they made, the scratches in the top. It was her first furniture purchase.

“It’s really nice. You can see the whole city. And the people I was with bought all the drinks. Those mojitos are really…. nice.”

“I don’t get how you can have a good time sitting and drinking and talking about work… all night. And how come you’re being so cheap? I thought you had all this money?”

“The car again. Ugh. It kept dying on the way home the other night.”

“I don’t get why you have a car either.”

“Oh is this from ‘can I borrow your car to go to Yosemite’?”