dejunking & the flow of stuff 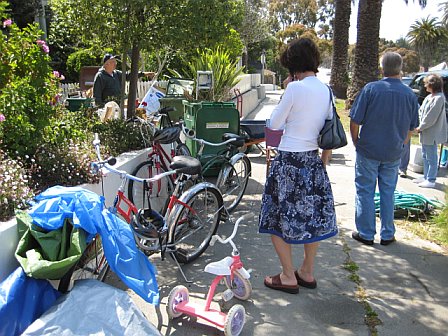 Ah, the joys of dejunking. I’m sitting here and it’s so peaceful and organized, and I can see surfaces of counters and tables, and there aren’t a million little reminders of projects and things to get done.

The backstory is that I drove down to San Jose on Friday to have my very first set of parents test drive my Business Idea- I was sorely unprepared, it broke 1/2 way through, and I drove home with crazy thoughts in my head, of re-architecting the thing, of various huge changes I could make. I fixed one or two things that night, got to bed late and was still mind buzzing with tons of changes I could/should/would make. Next day? Well, when you’re faced with about two weeks of work on a project you’ve spent 1 month + on, what do you do? Procrastinate. I started with the bathroom and worked through the bedroom to the living room, cleaning, piling up old s**t, and generally being ruthless. Do I need four toss pillows on the couch? No. Do I need to keep around a lamp that I can’t find a bulb for? No. Can I put games and knitting in the closet for access? Yes. I hung paintings, I re-arranged furniture, I even (gasp) cleaned out the top cupboard over my fridge, the general “holdall” for miscellaneous things. Gone: 6 car cups. Gone: broken rice cooker. I had power here, I was in control, no feedback, I’m the driver, I’m the winner.

My brother visited the house he was born in, in a suburb of DC. The owners were the same people who bought the house from my parents. The guy was amazed at what a good housekeeper my mom was. “We kept on opening cupboards expecting to find some old box of something or a dishrag- nothing, it was all spotless.”

Once, when I was working on the internet movie, I got into a similar phase of working all the time at home, and my sister Jenny was scared/worried and/or maybe I was complaining about the mess all the time. Anyways, she drove up and did intervention cleaning in my tiny 10×10 studio. After it was done, she said, “You’re not one of those people that have piles of rotting food in the back of a cupboard, or molding rice in the closet or weird things in strange places- the worst you had was potting soil under the sink.” Gone: 3 boxes of stale cereal.

One of my favorite writers, Anne Tyler, has a supporting character that’s a dejunker (Saint Maybe), her business is to go to houses and help them sort through everything. I love that concept. Sometimes we just need the responsibility of objectivity taken from our hands. Sure, some of those car-cups were my parents’, but hey, I’ll just buy them a nice one with San Francisco emblazoned on it. They have my WYPR mug (baltimore NPR), anyways. It’s a flow of stuff.