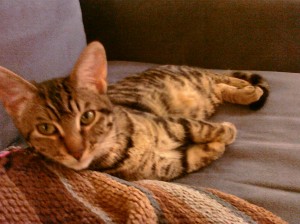 The blogosphere is full of a lot of posts about this particular problem, but I thought I’d chime in with my own insights. This is evidenced by two errors. First, whenever you try to do any kind of rake db task:

Second, you cannot install the Mysql Gem. missing libraries, or other errors, didn’t save them when I got them! Sorry.

Solution Part 1: Know Your Computer
I have an old MacBook2,1 with 64-bit core 2 duo processor. That means, it’s “x86_64” architecture. It is not “i386”. It took me a while to convince myself of this. I looked up under the Apple at the MacBook’s “about this Mac,” I read the Wiipedia site on the Mac series- FYI all kindsa nerdy details at the Model Specifications section.

Solution Part 2: Re-Install MySql & Gem
I finally got Ruby on Rails to register my MySql installed 64-bit software by doing the following:

Did you like the gratuitous photo of my cat? Makes these tech posts more interesting!

StackOverflow on the same issue
More explanation re: archtypes on TechLiberty blog