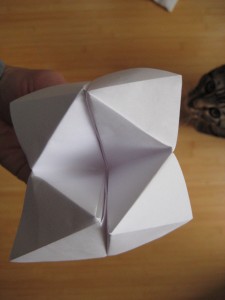 At She’s Geeky last weekend, I put up a sign to propose a talk: “Cootie Catcher, Games for Girls.”

I was running late from other sessions and ran over the semi-circle of chairs and a white board in the center of the room. There I noticed 4 or so girls that had been waiting for about 20 minutes. Ranging in ages from 12 to 7 roughly. It wasn’t the only girl-oriented program on the board, but it might have been at that hour. One of the girls was already making a cootie catcher. I asked her to tell the grown-ups how to make them.

That was great, because 15 minutes later the grown-ups were still trying to make them. I was really winging it, and in the next bit asked the girls the rules for the game, and wrote them on the board. Much discussion over what was a Cootie Catcher, versus a Fortune Teller. The girl-teacher made a simple one with only fleas and no-fleas, and they called that a cootie catcher, but the one that the adults knew as a cootie catcher was what the girls called a “Fortune Teller.”

OK at this point you’re like, why are you writing about this? Or teaching it?

I attended a talk by my friend Sarah Mei on “Teaching Ruby to High School Girls” at SF-Ruby Meet-up a month or so ago. There was a discussion afterwards that was very inspiring- what was it that got women individually into programming. For me, I had access to a computer, was taught through various channels programming concepts at a young age, and due to my Mom, always had access to fun narrative, puzzle-ish games on the computer.

A study group I’m in wanted a project, and during Christmas it was Santa wheel, then I proposed we turn a game that is very popular with girls *already* into a computer game to instruct them on the basics of software development. Using test-driven development, and behavior-driven-development, as well as pair programming, which works great with girls, setup some instructions into how to learn about cmoputers by creating a simple game.

The more I thought of it, the more things started to make sense. Games are great introductions into programming, as they’re fun and interesting, interactive, and a great career option. Anything that shows the “genie behind the curtain” is useful, but games where the overall architecture and construct is simple and well-known helps. The girls told me the rules quickly and easily, almost as if I was stupid.

I’m getting some criticism that this is too complex- and also got some great advice from Sarah Mei the other day to make the application in a few different flavors and iterations before making one that you will teach.

The class at She’s Geeky basically dissolved after we wrote the rules and I told them, “This is all you need to make a computer game, this list of rules.” But I wasn’t disheartened as I’d learned from another teacher that kids at that age basically need instruction in 5 to 10-minute increments. The rest of the class involved the adults getting together talking about how we were going to do this, Sprites and JavaScript, Rails, Objective-C, mobile. Two girls ran around asking each woman individually to play the game, while we were discussing it (ah, multi-tasking.) The teacher-girl and I had this conversation near the end:

I didn’t quite get across the idea that she could *make* the game herself. But, this was my first time talking to actual girls about the idea. I have a few other guinea pigs I’ve lined up, for next time.