I am chugging right along on this application- and, you guessed it, a cootie catcher. The next step is to create a simple animation of the paper toy opening and closing (based on user selection).

The task: based upon a button click, animate 3 images to simulate the opening and closing of the toy. Slightly more complex than the last application- Airplane Pie (an image revealed by a button).

To simplify this even more, I’m pretending the user selects “Blue”. For those of you that don’t know the game, that means the toy opens and closes 4 times (the number of letters in Blue). So we have a static number- 4, and one button to manage the input. We don’t have to handle passing parameters to objective-c classes (for this example, at least).

1. Create a View-Based application in xCode. Let’s call it Example.

2. In the ViewController.h, we will call the method:

3. In the ViewController.m, add the code for the method:

We’ll fill in that code later.
For shits and giggles, build & run. You should see a gray screen on your emulator iPhone.

5. If you want, setup an initial image. Add an image to the View.

Note: To add an image to your project, go to your finder, and find a photo, drag it over to xCode’s “Resources” folder for your Project. It’s now available in the Library/Media pane of Interface Builder.

Add 2 more images to the xCode properties folder, for the animation. Don’t add them to the View, though, in Interface Builder.

6. Create a button, call it “BlueButton” and put it somewhere on your View. 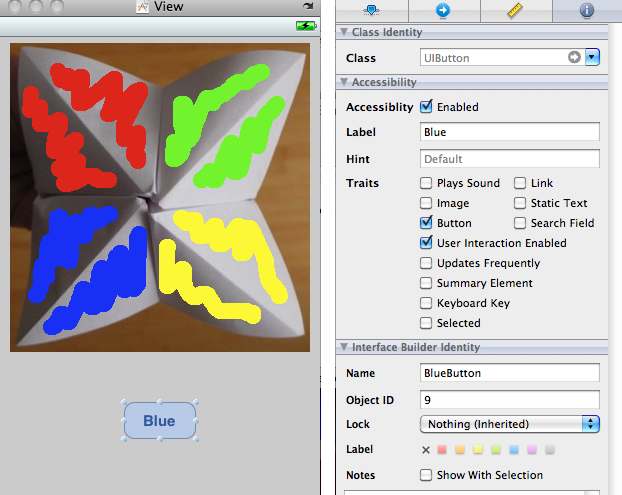 7. Now, we are going to connect our interface objects to the classes and methods of our code. So Ctrl-Click on the Button, and drag to the “File Owner”- this is the object in a separate window represented by a yellow box. At that point you should see “ClickBlue” action name pop up. Yay! 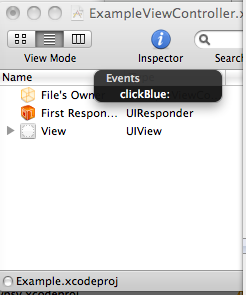 8. Ctrl- Click from “File Owner” to the View (anywhere gray on your View). You are now associating inherited objects from the View as outputs from your code. 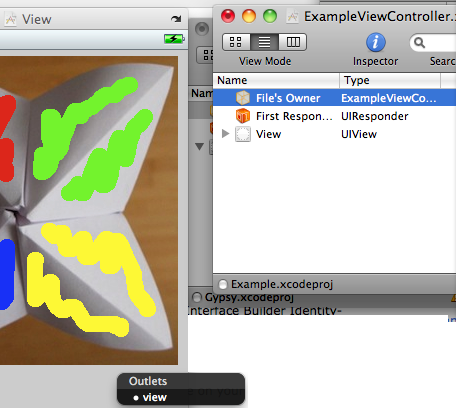 9. Save, go back to xCode. We are now going to setup our variables and objects and expand the BlueClick method.

10. In the ExampleViewController.h file, add the button variable to the interface block:

13. Add property variables to the bottom before @end:

14. In the implementation file (ExampleViewController.m) we will synthesize the objects:

15. Let’s add the animation! So now we’re going to do a couple of things:

First we’re going to create our own animation method, so we can call it from various points.

Now we’re animating an ImageView, which is a kind of view container that holds various images. We will define an array that has the images in it.

Don’t forget to leave that last item in the array as nil. Also, you can pass already created image variables in there instead of creating them on the fly. I repeat “closed” because this is how it looks in real life, when you play the game.

Create the ImageView. Image Views are view containers specifically for Images, and also have this neat quick animation methods – instead of getting too deep into the animation options (which is fascinating, btw).

I had to redefine the rectangle so it overlays the earlier ImageView more precisely, then associated the frame with the ImageView. You can also do a simple initWithFrame: [self bounds], instead. If you know how to do this better, I’m all ears. Values are: x, y (starting points), and width & height.

The last line above starts the animation off with an initial image.

There are various settings, but these ones directly concern me:

Remember to associate your array with the ImageView:

And the final command to get it going! First one starts the animation, second pops it into existing context and view, and third releases the memory object after it’s finished.

16. There’s one last bit: getting it to run with the Click touch. So from your BlueClick method: 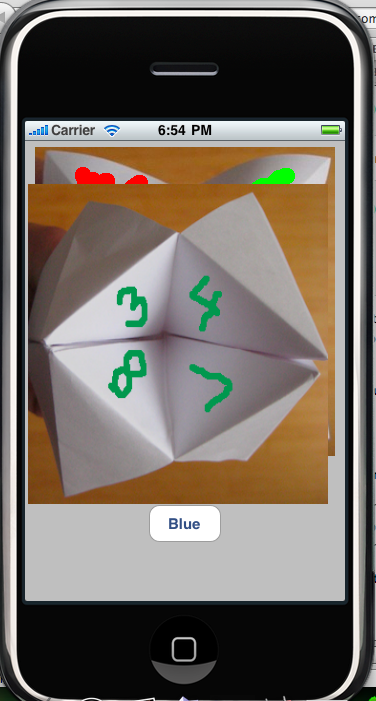 Here are some common problems:

– Get user input to set the colors & variables
– Passing parameters to the method (not locking them into “Blue”, ha!)
– Shorter animation cycle, with alternating image