I have a few apps that are open source & the code is available:
CootieCatcher

http://code.google.com/p/cootiecatcher
Currently in store. This is a “teach girls to program” game, it’s a release. Using Core Data and some basic animation to create a fortune-telling game. I’m the only developer. 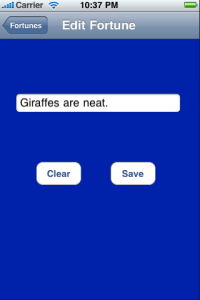 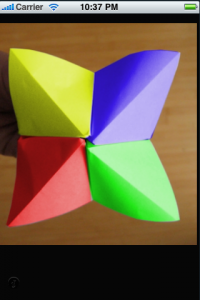 Le Bingueau
http://code.google.com/p/bingueau/
A bingo game to help you learn French (or any foreign language). I’m working with a French translator to provide a series of increasingly difficult dictionaries, levels, and various game boards, with animation as a reward. We’re probably 80% done on this. The upgrade plan is to introduce an iPad version for group play, and a server hosting personalized dictionaries (in other languages). I’m the only developer on this. This app is kind of complex: based on personal history, draw the game board to the level you’re at. Click a “deck” of English cards, then select the Frenchword on your game board. If you make a connection 5 down or across, and all the words are correct, move to the “win page” which has animation and analysis (for more word/vocabulary study). If you receive 3 perfect boards- no missed English words- then go up a level. If users select the wrong French word, tile is colored yellow and does not contribute to a winning pattern. 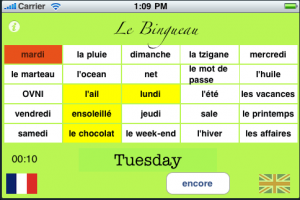 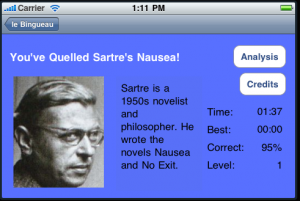 DicePad
http://code.google.com/p/ipad-gk-2010-dice/
Award-winner at iPadDevCamp 2010 for “Best New Developer”
This is a pair-programming project. My pair, Stacie Hibino, and I demo’d this for iPadDevCamp. It’s using GameKit networking. Two apps, one for server (iPad), one for client (iPhone)- detects bluetooth neighbors and waits for data from the devices. Devices, upon a substantial shake, randomize two dice objects and send the values to the iPad, where animation occurs and the two received data-dice are shown. 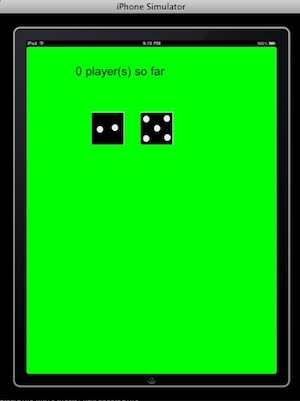