I’ve been thinking of making the best bingo online app ever since we started the Bingo franchise. I have seen lots of bingo games at bingobuddha with different kinds. And that made me think of creating something new. This is perhaps the hardest language I’ve learned next to Russian, and was super excited to have a simple little game I can play casually.

The other day I looked over my sister’s shoulder as she played with almost every Chinese app I had downloaded on my iPad- and I have a lot of them. I was working with a client on curriculum pieces for his Chinese-English school. While most of them are quite good, and use the iPad’s gesture recognition to improve muscle memory for writing, none of them are quite what the doctor ordered. The problem with flashcards is that they aren’t random enough, and the “honor system” is how they check against your knowledge- not ideal. I should probably write an app review on the different Chinese iPhone/iPad games I’ve researched!

Talking to a Chinese-American coworker the other day, she kept arguing with me that she didn’t know Chinese well enough to play. After going back and forth, she admitted she was “advanced intro,” which of course, is ideal for this game. 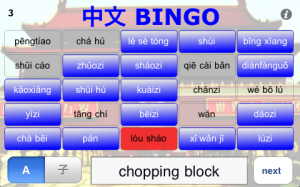 The thing that’s tough in marketing this game is that it’s for adults, and it’s not for beginners. It’s not impossible for beginners- I created a Pinyin version if you can’t read the characters- it’s just oriented for those with already an A,B,C, 1,2,3 working knowledge of Chinese.

I took Chinese a few years ago, advancing up to intermediate, but currently am quite rusty. I noticed, during the progress of this app an almost incredible leap in ability. At a meeting maybe a month ago, I wrote down all the characters I’d memorized. I could write 1, and vaguely remembered 5. This is from knowing 500 in my final year of school. After working on the game and playing it a few times a day, I now know 75 and can probably write by hand 50 from memory.

The real trippity trip is to download all the games and switch between them rapidly. I’ve had to do that to test some functionality, and it makes me boggle at the mind’s language capabilities. That might be an interesting game- cross-language.