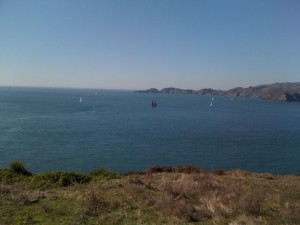 I lost my friend Roger yesterday. He was a kind of uncle to me, he was always there as I grew up. An expert witness in hundreds of court cases regarding how metal stood up under collision, he was a metallurgist trained in the Mining School in New Mexico, and ran a consultancy that contracted mostly with EPRI. He was incredibly smart, and an unpretentious intellectual.

He absolutely loved a well-written sentence. We shared a passion for Henry James. One book club consisted of he and I, and 3 others, sitting around a picnic table with bread, cheese and wine in Dolores Park, discussing The American. Recently Roger and I reminisced that it was our favorite book club, of the 100s we’ve had since ’93.

Regardless of what you were talking about, he would question assumptions and not let any false logic go by unexamined. Perhaps a little annoying, but once you caught onto the trick, you realized that life- conversation, discussion and examination- was very rich grounds. His son Josh does this very same conversational style, and I saw it in action last week- we were talking about Occupy Oakland. Me: “It’s funny that Jean Quan was in Washington when Obama was in San Francisco!” Josh: “Is that a bad thing?” Me: “Well she was going there to discuss it with him, and didn’t even know he wasn’t there.. do you like Quan?” (I’ve learned how to respond, haha.) Another classic Roger is that you should have an opinion, and be prepared to defend it. He and I differed on the purpose of reading. He maintained that reading should teach you something. I maintained that reading was for pleasure and sometimes discovery, but largely, mimetic. We enjoyed this difference, and debating it, frequently (to the delight of others, I’m sure.)

Roger took his wife Bev to China in 1987 for a conference, and their stories of that trip made a big impression on me. We routinely went out to Chinese restaurants in their hometown- Mountain View- largely to order an entire fish, a real delight to Roger. In fact, I think one of the reasons I was brought along was to have enough people to merit ordering a whole fish. Similar to how the Richmans adopted my family, they also adopted one of their favorite Chinese waiters, Chi-Ling, a struggling programmer who was working in a restaurant until he got a job. As Chi-Ling married and had kids, our untraditional South Bay family grew at birthdays and holidays. When I eventually travelled to China I was honored to visit with Chi-Ling’s niece Jenny, a woman very nearly the same situation as I. That kind of cultural insight was truly valuable. Roger was quite disappointed when I stopped studying Mandarin, but glad that I visited.

Being Jewish was quite important to Roger, and once when I was 16 and they took me out to dinner- at the Caravansary, a great restaurant in Palo Alto’s mall- I told him that I wanted to be Jewish too. He laughed- he had a great big kind of shocking Ha! Ha!- and told me that you’re not converted to Judaism, you just live it, like a lifestyle. There are things that you do, to be Jewish. It’s an interesting position, that he doesn’t necessarily believe in something, but that you follow the traditions. I’m sure I have this wrong and it’s not what he meant, but it’s something I’ve returned to quite a bit.

I remember noticing that my parents were grilling Roger on how he was going to vote on various South Bay bills and referendums- mostly because Roger had an opinion, and liked talking politics. I hesitate to say what he called himself, but I do remember him telling me that his grandfather (or great-grandfather?) was a real Red- bolshevik anarchist, that escaped Russia right after the revolution. His own views seemed very socialist to me, which lined up with my Dad’s socialist and Swedish upbringings. My mom was the odd one out, brought up in a staunchly Southern Californian Republican house.

He loved cigars, and asked me to buy him some on a visit to New Orleans. That led to my own love of cigars which one boyfriend managed to get me out of (thanks Elan). I loved going on a walk with a cigar or sitting in the garden. My favorite photo of him is one Bev took, that is on their wall in the hallway of their home. It’s black and white, taken at a low aperture (Bev’s a great photographer). Fuzzy, with the foreshortened cigar and Roger and his big square black glasses behind it, squinting through the smoke. I know he took a calculated risk smoking a cigar *every day* but in a way, that is our freedom- to make bad choices. He really enjoyed good wine, and luckily lived close to Ridge Wineries on Montebello Ridge. The celebration of life party his son threw was also a celebration of a hobby of amazing Ridge wine, from 87 onwards.

He loved good food- he truly enjoyed Bev’s amazing cooking- and he loved a good brisket, meatloaf, definitely into the savory or umami flavors. He wasn’t into desserts, which caused a lot of consternation when I was younger. How can that be?? Cats loved him, and he almost seemed embarrassed when they would prefer him over anyone else. He was a very steady person with a strong personality, and he will be missed.