So my last post I talked about a theory I have regarding our obsession with Facebook, namely, we suffer from “friend anxiety.” Historically we used to have vary rich social relationships, now we’re in the nuclear family age with more isolation. Technology has allowed us to reach out quickly and cheaply, creating an artificial fabric of social relationships.

Along with this artificial fabric comes very nuanced control over how we relate to others. We want to hide/block/message/chat/email specifically with specific people. Our governance of this thing is great and awful at the same time. Great because we do get control how we interact with almost every single person we come in contact with. Bad, because our control isn’t “real.”

I feel like online activity is partially beneficial, but not 100% of an entire, full social encounter. So it’s not bad per se, but if we rely on it for social interactions, we’re not getting full benefit. It’s like a diet. Instead of whole grains and vegetables, we’re getting fast food. And, the less amount of social benefit is less efficient. 10 hours of online activity to an hour of real hanging out with a real person. That’s just an example, I have no idea really what it would be. But there is limited time, and with less efficient social encounters (online ones), it takes more time, etc.

Also- we’re so bad at presenting ourselves. How many people do you know that relate better online than in person? Why do we spend so much time on a medium where we don’t represent ourselves well- causing miscommunications, inaccuracies, etc..

What’s the big deal – do we really let Facebook take a primary role in our social lives? I don’t know, in a way it weasels in, not in a pre-planned way, but just as email is distracting and compulsory, Facebook quickly becomes that way. After spending an hour on Facebook do we really want to walk around chit-chatting with friends and neighbors? Again, the diet metaphor. We have a certain period of time or energy in socializing, and the rest is parenting, learning, commuting, working, etc. So it does take up an area of our lives, without really noticing it, where we’re spending more time online conversing and “checking in,” viewing updates, looking at photos, that we would otherwise spend interacting more “real” with others. 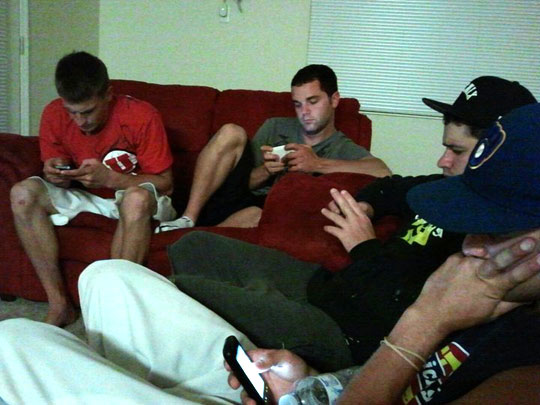 Recent studies show that Facebook makes people sad. People generally (there are studies here too, some done by my work) that say people mostly post positive things on Facebook. So viewers looking at all that positivity, question why they are so blue and/or not perfect, and the self-pity spiral begins. Does this happen in person? I’d say to a degree… you can take a Hipstamatic nostalgia photo of your adorable child eating an ice crea cone, but in person you’d see a tantrum, a spoiled brat, an exhausted parent, etc.

I’m not totally downers on Facebook, in fact, I think it’s like anything, in moderation it’s fine. But what intrigues me is in its popularity. Is it not so much for the technical feats (read sarcasm here) of Facebook, or the growth of technology in general, but because of a social fear that we all have?

An argument against: I was late coming to Facebook – my ID is in the millions, a sign of how late I joined- before that I was very into FriendFeed, and the same generally can be said of that. I wasted hours reading others posts. Each network has its speciality, FriendFeed was “interest-based” vs. relationship-based. Meaning, I had no previous relationship with any of the people, but we all liked photos of cats. You could make an argument that: because I made friends form FriendFeed, it justified itself, socially. Facebook has enriched high school and far-flung relatives’ relationships, but hasn’t created any new ones.