The Weeds of Bay View 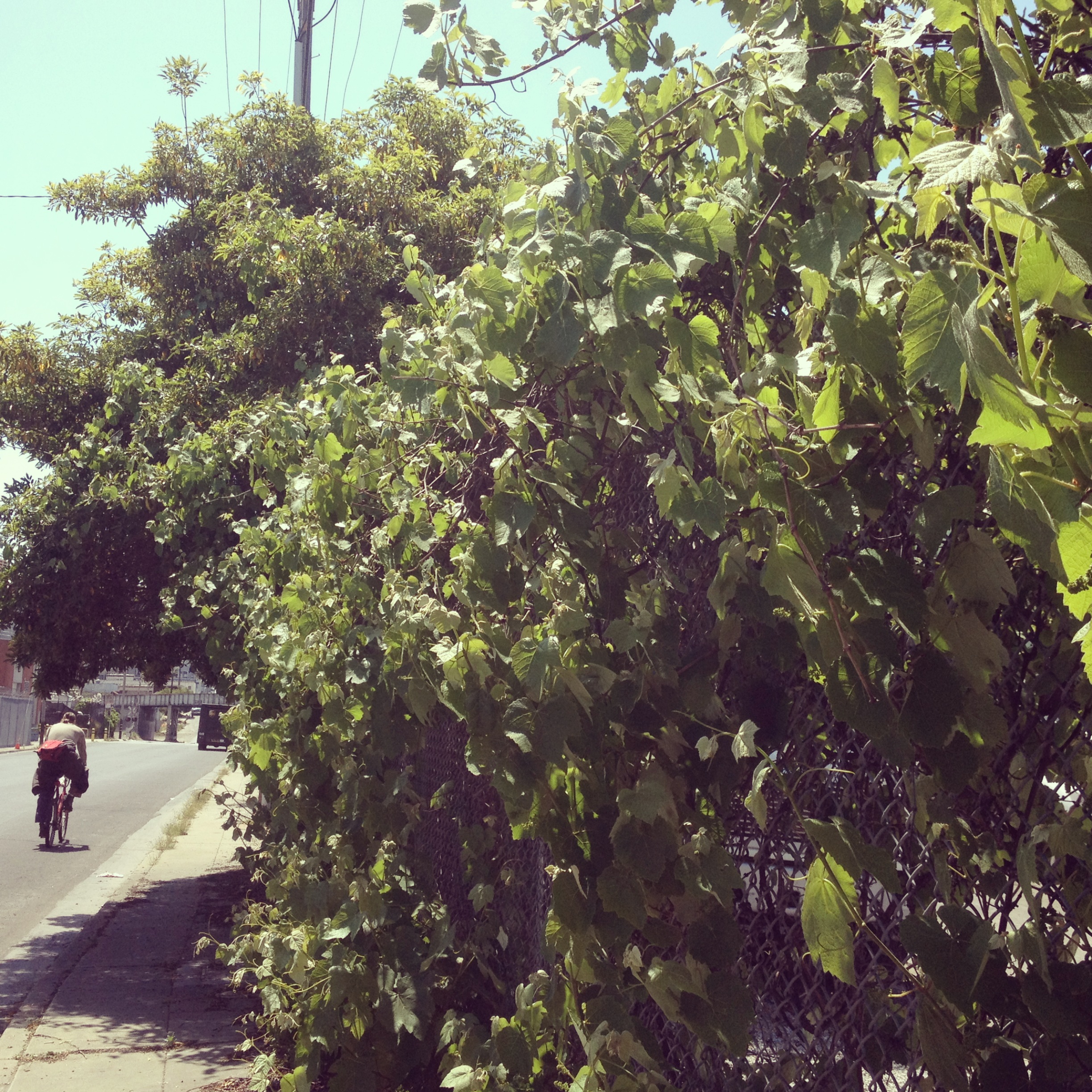 I’ve been working in the northeaster corner of the San Francisco neighborhood, the Bay View for a few months now. It’s an geurilla gardener’s delight. There is so much land- unloved, untilled, un-staked out by seemingly anyone. So, if, for example, you are interested in gardening but the closest community garden has a 5-year waiting list (see: Fort Mason), scratch that green thumb itch by grabbing some seeds, a trowel, some clippers, and then catch the T-Sunnydale to Bay View.

Here are some prime gardening locations:
– The Quint street and Caltrain interchange, new Jerrold, has about 4 acres of land
– There are about 3 empty lots on Oakdale, between Third & Bayshore that can be easily slipped through, or you can throw seeds over the fence.
– Tons of little sidewalk squares ripe for the gardener love.

There’s a natural wildness to San Franciscan empty lots and volunteer weeds popping up on the sidewalk. Last week I took a serious look at a few weeds lining my walk: Eschscholzia californica. Describing to a friend how this is hard to cultivate- you can’t really move poppies from one side of the garden to another. So when I see them popping (haha) out of the pavement, I appreciate it. It’s a really lovely bit of color, and it’s so weedy and grasslike… uh, graceful and delicate. More beautiful when it’s out across a field, turning the hillside lightly orange, but out in the urban wasteland- I’ll get what I can take. It’s one of the few California native plants in this weed line-up.
Uses:

An aqueous extract of the plant has sedative and anxiolytic action.[8] The extract acts as a mild sedative when smoked. The effect is far milder than that of opium.

Fun Fact:
Named by a German, after another German, on a Russian ship, pre-American statehood:

Eschscholzia californica was the first named member of the genus Eschscholzia, named by the German botanist Adelbert von Chamisso after the Baltic German botanist Johann Friedrich von Eschscholtz, his friend and colleague on Otto von Kotzebue’s scientific expedition to California and the greater Pacific in mid-1810s aboard the Russian ship Rurik. 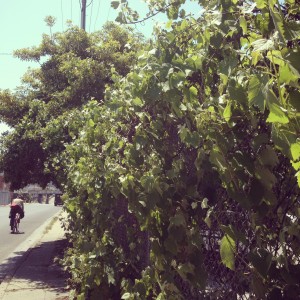 Vitis californica. I took this photo on Quint Friday- it’s a wild grape. It will be awesome around fall this year. I just read about California wild grapes- didn’t think I’d ever see one so soon after reading about it. May have to do a bit more identification, but seems very unlikely that someone’d cultivate a grape on the side of a gravel lot, across from the water pollution treatment center, ha. Also gets the “noxious weed” assignment, haha. Also a rare SF/California native plant.

The cultivar ‘Roger’s Red’ (named for noted horticulturist Roger Raiche) turns brilliant red in fall and is a hybrid with a wine grape, Vitis vinifera Alicante Bouschet. The cultivar ‘Walker Ridge’ turns yellow in the autumn.

Centranthus ruber. Beautiful flower, popping up among grasses or just right out of the sidewalk. “They have a strong and somewhat rank scent.”, “Often seen in urban wasteland” (poor Bay View). I’ve also heard it described as “burnt tire” smell. Why would you smell it- that’s something funny with plants, rarely do people actually crinkle and smell them (anymore?).

Both leaves and roots can be eaten, the leaves either fresh in salads or lightly boiled, the roots boiled in soups. Opinions differ as to whether either make very good eating, however. Although it is sometimes reported to have medicinal properties, there is no basis for this view, which is almost certainly due to confusion with true valerian, (Valeriana officinalis).

Herb Robert
Geranium robertianum. “… it is known as Stinky Bob and classified as a noxious weed” NOt sure I’ve ever heard of noxious weed outside of Monty Python.

In traditional herbalism, Herb Robert was used as a remedy for toothache and nosebleeds.[1] Freshly picked leaves have an odor resembling burning tires when crushed, and if they are rubbed on the body the smell is said to repel mosquitoes. The active ingredients are tannins, a bitter compound called geraniin, and essential oils. It was carried to attract good luck, and due to its analogical association with storks, to enhance fertility.

Fennel
Foeniculum vulgare . I love fennel- it smells like licorice, the bulb is a great starchy root. I replace fennel root with potatoes in some recipes to liven them up. It’s a big, boisterous, invasive weed but has so many uses. Namely, for San Franciscians who love their booze, its’ the primary ingredient in absinthe.

The word “fennel” developed from the Middle English fenel or fenyl. This came from the Old English fenol or finol, which in turn came from the Latin feniculum or foeniculum, the diminutive of fenum or faenum, meaning “hay”. The Latin word for the plant was ferula, which is now used as the genus name of a related plant. As Old English finule, it is one of the nine plants invoked in the pagan Anglo-Saxon Nine Herbs Charm, recorded in the 10th century.
In Greek mythology, Prometheus used the stalk of a fennel plant to steal fire from the gods. Also, it was from the giant fennel, Ferula communis, that the Bacchanalian wands of the god Dionysus and his followers were said to have come.
The Greek name for fennel is marathon (μάραθον) or marathos (μάραθος),[3] and the place of the famous battle of Marathon and the subsequent sports event Marathon (Μαραθών), literally means a plain with fennels.

Tropaeolum majus. I grew up with this landscaped along our driveway by gardeners hired by the housing development. Somewhat OK for landscaping though it tends to look messy. You find it all over SF- it grows in big swathes low to the ground, cascading down Telegraph Hill on the steep unpopulated eastern cliffs. Beautiful, and edible, what more could you ask for?

Note: it’s *not* the plant with the Latin name nasturtium. That had me confused for a while. Fun fact: It’s from Bolivia, near the Andes.

Uses:
Seeds, flowers and leaves are all edible. Good “companion” plant to broccoli and cauliflower, to repel aphids.
Source: Wikipedia.

Oxalis (buttercup)
Oxalis pres caprae. This weed is the scourge of my father- he literally has spent many, many hours pulling it from their garden. As a kid growing up in California, this was always a tasty treat- I’d grab a handful and suck on the stems- they were sour and bright tasting.
It’s from Africa, and now a weed in coastal California. It propogates with tiny little bulbs in its stem, so when you pull it you really have to dig deep.

The plant is palatable and in modest quantities is reasonably harmless to humans and livestock. In South Africa it is a traditional ingredient in dishes such as waterblommetjiebredie (water flower stew). The plant has been used in various ways as a source of oxalic acid, as food, and in folk medicine. The raw bulbs have been used to deal with tapeworm and possibly other worms. The plant has been used as a diuretic, possibly hazardously, in the light of observations in the following section. The lateral underground runners, which tend to be fleshy, have been eaten raw or boiled and served with milk.[9] The golden petals can be used to produce a yellow dye

Note- there’s some associated sheep death when they are hungry and eat a large amount, though they don’t know why or how it happens.
Source: Wikipedia