Christmas Traditions… it’s for us. 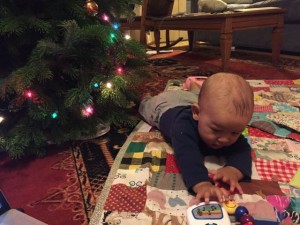 I talked to my sister yesterday, and she mentioned that our traditional Saffron yeast buns were the most popular at her kid’s school’s holiday craft fair. In that conversation we got around the crux of it: holidays are for us. Basically, as Swedes and as kids who grew up in a large, fun festive family, we enjoy the traditions probably more than the husbands or kids. And that’s good, since we’re doing all the work!

This yeast bun recipe is hard work- and I told her that- and was impressed that she “just whipped it up” in between doing other chores around the house. It involves making a bread dough, letting it rise for hours, then rolling them into shapes, letting those rise, then baking.

The smell of the baking yeast rolls permeating throughout the apartment is to die for. She mentioned that some of her neighbors- an ethnic mix of SouthEast Asian and Filipino families- remarked that Saffron was for rice, not breads. We joked that the 17th century colonialists screwed it up. Spice? Yeah, that’s for cookies and cakes, ha ha.

The holiday work I’m doing… bought the tree, decorated it, brought out the boxes from storage, cleaned up the house before decorating, made (cough, storebought) eggnog, sit with boo and go over the advent calendar each morning. Boyfriend just sits by in amazement at this activity for the normally lazy me. I’m not religious but bring out the crêche, tell the story of Jesus, and enact my little stories for each figure (to my son, of course haha). Make and send Christmas cards. Buy, wrap and send presents (14 recipients this year…) I caught myself wanting to buy a new ornament, a new Santa mug, etc. at World Market, even though I had to recycle about 30 ornaments.

One tradition my boyfriend may embrace- we’ll make little budy do the St. Lucia march to the parents room with rolls and coffee. Even though it’s supposed to be the youngest daughter, he’ll have to do. Wait, he’s 5 months, whoops. That may have to wait.